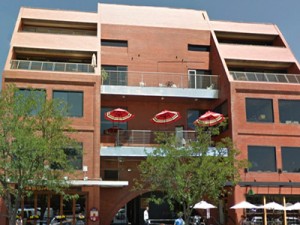 BOULDER -- In May, the wildly popular entrepreneurial hub Galvanize opened the doors to its newest campus, an 11,000-square-foot space on the west end of Pearl Street - right in the heart of Boulder.

The new campus is a natural extension of Galvanize's "innovation ecosystem" philosophy, which has become a springboard for more than 150 tech-minded outfits from big names like Pandora and Skype to the Colorado-based powder forecasting website Open Snow.

The Boulder space isn't quite as large as the Denver original, but the basic amenities and rates are nearly the same, with memberships based on individual seats (perfect for budding entrepreneurs), desks (a flexible home for small startups) and seven suites (made for fast-growing companies with four to 20 employees).

Each membership includes wireless Internet, conference rooms, printers and the like - not to mention access to an in-house gym and kitchen - along with furniture and signage for multi-person options. Pricing starts at $349 per month.

And the Pearl Street location is filling rapidly.

It isn't quite at capacity, but it's drawing the same kind of fervent interest as the flagship space in the Golden Triangle neighborhood, which now houses roughly 100 members at the revamped Rocky Mountain Bank Note Building on Delaware Street.

In mid-June, Galvanize raised $18 million in Series A funding through University Ventures Fund to support further growth, including new classroom space and several new programs come fall, along with another proposed new location in Fort Collins.

For Chris Onan, Galvanize co-founder and managing director, the Boulder expansion is just the beginning.

"There is a demand for community in this tech world," says Onan, who boasts more than a decade of experience in the venture capital world with groups like Appian Ventures and Wolf Ventures. "Being an entrepreneur in the tech space is lonely and hard. The opportunity to be in a community of doers, people who want to make things happen, can be very supportive. You see that you aren't the only person trying to kick-start something new and exciting."

Over the past 20 months or so - a short time period, even in the rapidly evolving tech world - Galvanize has grown in step with its young, hungry community. It now boasts four separate campuses, with three along the Colorado Front Range and one in the like-minded tech mecca of San Francisco.

Along with co-founders Jim Deters and Lawrence Mandes, Onan wants to attract the best and brightest in the local tech community tech community. It's at the heart of Galvanize's homegrown philosophy, which champions mentorship and co-working over cutthroat wheeling and dealing. The founders created a community built by entrepreneurs -- for entrepreneurs -- even as it expands beyond humble roots. 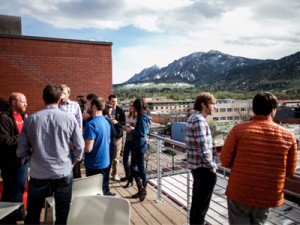 "We're slotting into a macro trend by offering tech entrepreneurs a space and community," Onan says. "We don't have lawyers or real estate agents or anyone else. I think that's resonating with so many people who seek us out - they can talk to people who are part of the local community. All the little tricks that entrepreneurs pick up as they move from the first startup to the second and third and fourth, that is what we provide."

As Onan hints at, simply being surrounded by other entrepreneurs can make or break a young business, and Boulder is a near-perfect addition to that inventive ecosystem. Local tech celebs like Brad Feld with Boulder's Foundry Group and David Cohen of TechStars have been involved since opening day, attracting entrepreneurs from incubators, the University of Colorado-Boulder campus and noisy, distraction-heavy coffee shops alike.

"Every place that Galvanize wants to be has similar threads," Onan says about recent expansions. "These places have energy around the entrepreneurial system, the mentors who can support the tech and pipelines - all those things that are different than working just with big business. But more than that, we need people on the ground connected to the fabric of that particular community."

Emilie Kintner is a vital part of that fabric. As community director for the Boulder location, she pulls from a background working with cultural non-profits to build an eclectic, enthusiastic workspace.

At less than six months old, it has already attracted interest from prominent partners like Blackstone Group, a private equity firm with ties to the CU Law School. The firm has pumped roughly $4.5 million through the Boulder location to push new members - say, the two-person start-up Trunket to the 20-person app developer Splick.it - to the next level.

Thanks to the CU-Boulder connection, education has caught Kintner's attention - not to mention that of young, college-aged entrepreneurs. The gSchool program graduates its first class in August, and a handful of current members split time between undergrad lectures and Galvanize brainstorm sessions.

"I was immediately enamored by the amount of creativity in our spaces," Kintner says. "I like the thought of educating entrepreneurs, just looking at education in a different sort of way. All campuses moving forward will have to follow that model, but still make sure they're in touch with the local community.

"Boulder is a much smaller physical location, but the community around town is so well-connected. We have to make sure we're relevant to that community."

Again, new floor space is only the tip of the ever-growing Galvanize community. 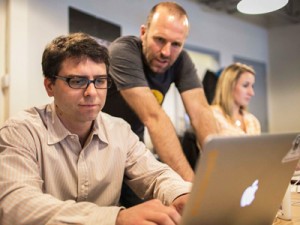 This summer has been particularly busy: Boulder is now home to the next round of students with gSchool, Galvanize's real-life entrepreneur curriculum, and on July 23, the San Francisco campus announced an exclusive apprenticeship program with Pivotal Labs, a tech company on the forefront of Web and mobile solution coding.

"It's been a nice informal relationship for 18 months, and this apprenticeship is now a perfect way for our community to really interact with the real tech world," Onan says. "At Pivotal, all the way through their leadership team, teaching and mentoring are a huge part of what they do. It's a natural fit to pair with our community."

Although Onan can't yet comment on the proposed Fort Collins space and additional program funded by the $18 million in Series A financing, he coyly says the Galvanize community should "stay tuned" for what's on the horizon.

"Whether it's raising capital to support what we do or just talking about Galvanize, we all work together - it's part of our ethic," Onan says. "If someone needs help, we all pitch in.

"Not only do we eat our own cooking, we truly believe in it. We're part of that entrepreneurial community."