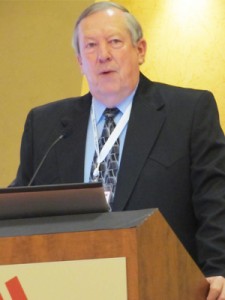 DENVER - Colorado's water supply is under stress from population growth, downstream contractual obligations, agricultural demands and uncertain climate conditions -- all pointing to a water crisis in the near future unless something dramatic and innovative can be done to avert it.

That was the key message on the first day of a two-day Colorado Water Summit held Monday in Denver.

"We'll continue to deal with drought in the future, but in a smarter way than we have in the past," Stulp said.

State water experts and planners are working to develop the Colorado Water Plan, called for by Hickenlooper last May in an executive order in response to the drought of 2012, which was the worst year in the state's recent past.

While the state received devastating, unexpected rains that caused major flooding last September and snowpack in the state's mountain basins is generally above average this winter, ongoing drought in some areas of the state is one reason for creating a Colorado Water Plan.

"Seventy percent of Colorado is still under some form of drought classification," Stulp said, also noting that the state is contractually obligated to share water with 18 downstream states.

Stulp, an Eastern Colorado farmer and rancher, also noted that the state wants to move away from its traditional method of obtaining new water - buying up water rights from agriculture -- for urban development.

"Traditionally, water has come from agriculture but we've decided this is not the best path forward," he said. "We want to minimize the buy-and-dry of agriculture."

Stulp said one recent growing demand on Colorado's water - hydraulic fracking by the oil-and-gas industry - is currently diverting an estimated 17,000 to 18,000 acre-feet of water for those operations.

But Stulp said although that's expected to double over the next 20-30 years, it now only amounts to less than one-tenth of 1 percent of the state's water diversion.

"It's still a relatively small amount," he said.

Thoen said one possible solution might lie in filtering technology that can treat brackish water for drinking and other potable uses.

"Colorado has abundant supplies of brackish groundwater," Thoen said, but noted that its saline content is an issue.

"Eighty to 95 percent of that water can be reused with new technology, but there are (salt) disposal issues," he said. 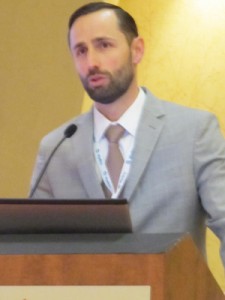 James Eklund, director of the Colorado Water Conservation Board, said a new Colorado Water Plan would be built upon the state's original "Doctrine of Prior Appropriation" that's served the state from its earliest days.

"Colorado's water plan must and will work with the Doctrine of Prior Appropriation," he said. "Our system rests on it."

Eklund said Colorado is a "headwaters state" with its water originating inside the state and never needed a water plan until the drought that has plagued the state since about 2000.

Eklund noted that - with the exception of Arizona, which is beginning a water planning process - all of Colorado's surrounding states have a water plan in place.

Eklund said the water plan will also build on the Statewide Water Supply Initiative (SWSI) adopted by the Legislature in 2003.

"The Colorado Water Plan is really the first attempt for citizens to engage in a statewide exercise to find out what we want to do," he said.

State residents will have a year-long opportunity to comment on the draft plan after it is submitted in December.

Carlos Rubinstein, chair of the Texas Water Development Board, said Texas' recent experience dealing with severe drought might offer some ideas that could be incorporated into a Colorado Water Plan.

In 2011, Texas experienced the worst drought in its history and began developing a water plan that will invest at least $2 billion in loans, grants and infrastructure to help make the state more drought resistant.

Rubinstein said the state is hoping to fund up to $27 billion on water projects over the next 50 years by leveraging that $2 billion.

But Rubinstein cautioned Colorado officials about taking too much from Texas' experience.

"You have to come up with a plan that's right for you," he said.

Forbes Guthrie, VP of Stewart Environmental Consultants and chair of the two-day Colorado Water Summit that concludes today, said the summit is intended to stimulate discussion and action.

"We're becoming more and more reliant on a very finite resource," he said. "It really is a matter of sustainability and how we use our resources.

"These types of conferences are invaluable for putting government and industry leaders together. If we don't have water, nothing happens, and that's a big deal."