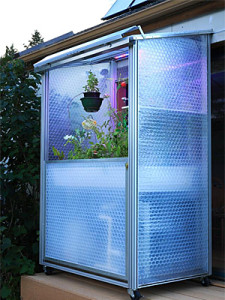 NEDERLAND -- My Terrace Farmer (MTF) is a solar-powered, rain water-irrigated, remotely-climate-controlled, miniature greenhouse designed for use on an apartment terrace, a patio-home patio, in a small backyard, and anywhere in between.

The product - the first creation of three-year-old Solar Greens, Inc. -- is an innovation wrapped in an invention based on an idea developed by a company deeply interested in solar power, sustainability, gardening and leaving behind the smallest carbon footprint.

According to Chief Designer George Blakey, MTF's "first and most significant innovation is the use of SolarWrap™ greenhouse glazing material." Blakey and Solar Greens' founder and Chairman Greg Ching discovered this replacement for traditional polycarbonate sheeting when it was first imported into the US.

Despite initial reservations about having to redesign the vertical sliding doors to accommodate this new non-rigid material, Blakey quickly discovered that SolarWrap -- which looks like bubble wrap's big brother -- "outlasts polycarbonate while offering superior UV protection and better thermal properties."

It's nearly indestructible as well, which is helpful when the MTF is subjected to the strong stick-and-small-projectile-hurling Nederland winds.

The next innovation is the frame, made of aircraft-grade aluminum because it's lightweight (for easy shipping and assembly), corrosion-resistant (it is going to be outside all year, after all), and very strong (so it doesn't bend or break in the wind as many small-scale greenhouse frames do).

Blakey designed the two wider sides of the rectangular-shaped frame as two equal-sized, "vertically-sliding, counter-weighted panes to allow easy access to the waist-high gardening area and substantial ventilation to adjust the interior temperature."

The counter-weights, which work like old-fashioned, double-hung windows with a steel weight hidden inside the hollow aluminum frames, are essential because the four-foot-wide by three-foot-high door panels are heavy and must remain securely in whatever position the gardener sets them with no chance of crashing down on an unsuspecting head or arm. The narrow sides have no windows but include additional internal supports for the pan holding the heavy earth and plants.

The solar panels mounted to MTF's slanted roof had to be long and thin so they could absorb as much light as possible while blocking as little light as possible from entering through the roof, which is also made of SolarWrap.

In order to supplement the natural light that pours through the walls and ceiling, Ching and Blakey turned to the lights NASA developed for growing plants in outer space.

"Red and blue are the most useful auxiliaries to natural light," said Blakey. "MTF is not designed to be used indoors, so we don't need a full spectrum light source. The lights are intended for use in an area that is shaded for part of the day or to extend the amount of light plants receive in the winter."

Mike Seiler, VP of engineering, noted that this "highly efficient LED lighting can extend the growing day so that plants grow faster and can stay in a vegetative (as opposed to fruiting) state longer."

Seiler is the inventor of the Garden Genie, another MTF innovation. According to Seiler, adding the Garden Genie to an MTF, "automates water management, electric usage, heating and cooling, and watering and lighting, and can be controlled from anywhere there is internet access via computer, tablet, or cellular phone.

"Alerts can be sent from MTF to its owner as texts or emails, allowing a busy person to spend less time paying attention to the greenhouse or a family to go on an extended vacation without worrying about who is watering the vegetables."

Drip irrigation is acknowledged as the best way to water plants, so that is what Solar Greens uses in its MFT. The water that runs off the slanted roof lands in the collector that runs along the front edge. Blakey says this guides the water to "a large storage bladder (40 gallons) that works as a passive solar heat sink to keep the interior warmer while supplying water for irrigation of plants."

Seiler notes that, "water storage in the bottom of the unit keeps the greenhouse steady in high winds while moderating the temperature inside because water resists both heating up and cooling down."

Whether a specific MTF will need additional water from the hose depends on the weather, but even if it needs a little topping up from time to time, it will use less water overall than traditional greenhouses. And, the water in the storage bladder can be filtered to serve as a source of drinking water in an emergency.

Worm composting is known to be among the best natural ways to fertilize and the My Worm Farmer (MWF), which looks suspiciously like a small bamboo steamer, allows gardeners to create their own "worm tea" - the nutrient-rich liquid that results when water is added.

MWF sits on top of the smaller reservoir that holds the water used to irrigate the plants, keeping it close as well as shaded, and the "tea" passes through a fine sieve before entering the tank. All the water is recycled, so any nutrients leached out are put right back in with the next watering.

Safety concerns drove the decision to use a ceramic heater to manage the internal temperature. There is nothing on a ceramic heater that becomes hot to the touch, insuring that even if an MTF is blown over in a storm, there is no way for a fire to begin.

All this technology is powered by the solar cells on the roof, the power from which is stored in a simple 12-volt battery which, according to Blakey is "about a third of the size of a car battery and sealed so none of the acids can escape."

This means never having to plug your MTF into an external power source. It also means that, in an emergency, you can use the stored power to charge your cell phone or tablet.

Ching began with a $50K loan from a family member and then used a home equity loan and credit cards to fund the next $200K, used for building and testing prototypes and related startup expenses. Next they decided to use crowdfunding to test pricing and market acceptance while raising a little more money.

Solar Greens brought in 37% of their $20K goal in the first week and were at 105% at the closing bell. A few hours later, orders came in for another $6K. (One thing they learned - don't run a KickStarter campaign over the Christmas holidays.)

Their next step is a Direct Public Offering (DPO) scheduled for the second half of 2015.

About the Author: Lisa Dicksteen

Lisa Napell Dicksteen has been a writer and editor for over 30 years, and has published on education, relationships, style, technology, theater, food, dance, literature, social action, religion, academic success, continuing education and more. Her work has appeared in The New York Times, For Women FIRST, Newsday, Bride's, and numerous other consumer and trade publications. In addition, she holds a Master’s degree in teaching secondary English. A native New Yorker, she has lived in Boulder since 2007.