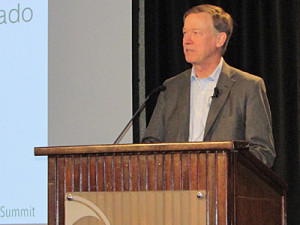 FORT COLLINS - Innovation is happening at a rapid pace across the agricultural spectrum in Colorado, with seed and irrigation improvements resulting in rising crop yields and more efficient, high-tech farm and ranch management methods producing more meat and dairy than ever.

But there's still much to be done in ag innovation to continue to meet the challenges posed by an ever-growing Colorado and world population, ongoing climate change and the daily loss of productive farm land to urban development.

That was part of the message Thursday during Colorado State University's Ag Innovation Summit, which is being held on the CSU campus this week and concludes today.

Craig Beyrouty, dean of CSU's College of Agricultural Sciences, set the stage for Thursday's program by reminding attendees of the challenges facing the state's ag sector, including the problem of food waste, food health and security, and an uncertain supply of clean water to grow crops.

Gregory Graff, associate professor of agricultural and resource economics at CSU, said the good news is that ag has always been innovative from its earliest beginnings.

"It has never been stationary," Graff said. "It's constantly innovating and will do so into the foreseeable future."

Graff noted that CSU and Colorado are both deeply involved in ag innovation, with the state ranking third in the nation - just behind California and Texas -- in research funding from the U.S. Department of Agriculture.

Graff also noted that Colorado was granted more than 5,000 patents between 1990 and 2012, with a patent growth rate of 6.5 percent annually.

Graff said there has been an emergence of an ag innovation cluster along the northern urban Front Range between Denver and Fort Collins, where most of the state's issued patents and scholarly publications on agriculture have originated.

"The urban corridor is the heart of ag innovation in Colorado," he said.

Kathay Rennels, CSU associate VP for engagement, said the inaugural Ag Innovation Summit was organized in the wake of a CSU report released last November called "The Emergence of an Innovation Cluster in the Agricultural Value Chain Along Colorado's Front Range," which notes the elements in place for an ag innovation cluster in the state.

The three-day Summit kicked off Wednesday and concludes today at the Lory Student Center.

Hancock said the City of Denver is taking steps to encourage urban gardening, food cooperatives and ag innovation. A planned $856 million redevelopment of the National Western Stock Show facility - which includes CSU as a partner - would include ag research space and incubation of startup ag-related businesses in a new year-round venue, he said.

"I think the opportunities are boundless here," Hancock said, predicting the completed project will "cement Colorado as a leader in ag innovation."

Hickenlooper praised the state's reputation for attracting talented ag researchers and entrepreneurs. He said the state's successful courting of food giant Ardent Mills last year was due to the company's desire to tap into that resource.

"We won Ardent Mills because they wanted to be in this corridor of innovation," Hickenlooper said.

"We are blessed with creativity and collaboration that can take Colorado to heights never before imagined."

Panel discussions on Thursday focused on issues that included developing and recruiting talented workers for an increasingly innovative ag sector, achieving a secure and healthy food system, and dealing with a growing water shortage due to climate change and -- until recently - a booming oil-and-gas sector. 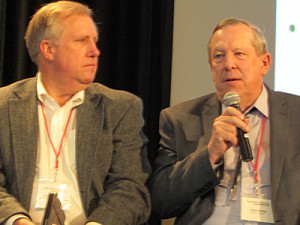 Colorado is in the process of finalizing its first statewide water plan and is encouraging citizen input by visiting the plan online. The plan has become especially important in recent years as the state's rapidly-growing population is putting a strain on Colorado's uncertain water supply.

"Previously, we were able to go to Colorado's farmers to get water (for development), but we can't do that anymore," said Dave Stewart, owner of Fort Collins-based Stewart Environmental Consultants.

But despite the challenges still facing the state's agriculture sector, Graff said the future looks bright if public and private partners can continue to work together in a spirit of cooperation and collaboration.

"There's a lot we can do to help foster this," he said. "I think we're poised to become the Silicon Valley of agriculture in the 21st century."