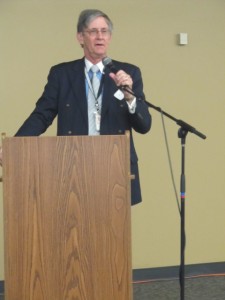 LOVELAND - The City of Loveland rolled out its connection with NASA on Wednesday, spotlighting the possibilities that might be
realized between the space agency and local companies looking to tap into NASA research and assistance.

It was an opportunity to network with NASA representatives from the John Glenn Research Center in Cleveland, Ohio and the Denver-based Colorado Association for Manufacturing and Technology (CAMT).

The event also offered an update on the city's Technology Transfer Initiative funded through a $150,000 investment by the Loveland City Council earlier this year. The initiative aims to help local companies increase the commercialization potential of their products and services.

David Lung, DA2 Consulting in Longmont, was hired by the city to lead the tech transfer initiative. Lung is a former Air Force officer with extensive connections in NASA and other federal agencies.

Lung's NASA connections helped bring the NASA delegation to the event to share the agency's mission to get NASA research into the private sector to stimulate economic activity and create jobs.

"In order to make tech transfer work, you need a rich source of technology, and that's NASA," Lung said. "You also need some innovation, to be able to look at that technology for space and say what else can we do with that?

"There's so many brilliant (NASA) scientists and engineers doing advanced research and development, but what they don't have is the business perspective."

Lung said he's met with more than 20 local companies since the first of the year to try to marry NASA research with business needs.

The event featured some of NASA's major players at the John Glenn Center, including Ray Lugo, center director, and Joe Shaw, deputy director of the center's office of technology partnerships and planning. 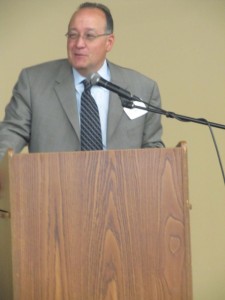 "We are committed to establishing relationships in Colorado," Shaw said. "It's so important for us to have a presence here."

Shaw said NASA has been charged by the Obama administration to step up its technology transfer "to make sure there's a maximum impact beyond our needs."

Nine NASA officials attended the technology showcase, with several giving detailed presentations on the kind of research being conducted at NASA's Glenn and Langley research centers.

After the showcase event, Louisville-based Altius Space Machines - which had a booth at the showcase - announced it has signed a Space Act Agreement with Langley Research Center in Hampton, Va. to develop concepts for a new series of compactly-stowed, long-reach spacecraft robotic manipulators.

Diana Hoyt, NASA program executive in the agency's Washington, D.C. headquarters, said a new NASA policy allows a company to obtain a free research license for the agency's technology -- in as little as two weeks -- and hold the license for up to a year to see if it can be put to use by that company.

The showcase was held at the Rocky Mountain Center for Innovation and Technology, the four-building, 800,000-square-foot former campus of Agilent Technologies purchased by Kentucky-based Cumberland and Western Resources last year from the city of Loveland.

The Center is a potential site for any new innovative company looking to locate in Loveland or existing company seeking expansion space.

Buddy Steen, vice president of technology for Cumberland and Western, said while no companies have yet signed to take up residence in the Center, C&W has talked to a number of prospective tenants since buying the facility last December.

"We're talking with lots of folks," he said. "They're bigger companies, so it takes some time. But we're very pleased with the response we're getting."

Steen said he could not predict when an announcement might be made about signing the Center's first occupant but hinted it could come at any time.

Meantime, Loveland Mayor Cecil Gutierrez said the goal of the city's tech transfer initiative is to make the city a hub of innovation in the state.

"The key has been the implementation factor," he said. "It seemed to us (city council) the strategy was to hire Dave (Lung) and make the connection to NASA and the other agencies and connect them to our companies.