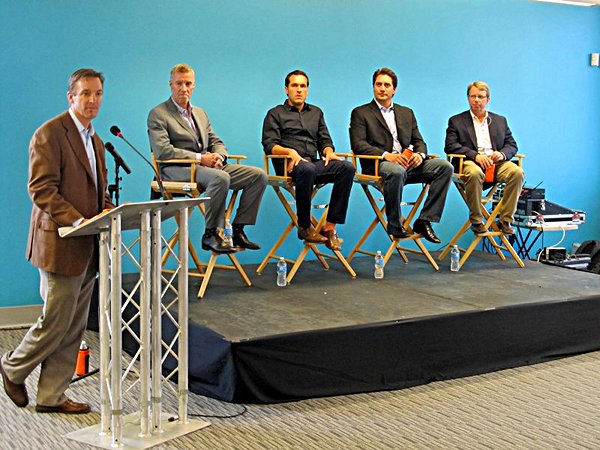 DENVER - Denver has most of the right ingredients to make it one of the hottest locations for tech entrepreneurs in the nation - almost on par with California's celebrated Silicon Valley.

The metro area and surrounding region has the talent, drive, entrepreneurial passion, educational facilities and government support that underpin a thriving hub of innovation, attendees of the Rocky Mountain Tech Meetup were told Tuesday during a panel discussion at the new downtown headquarters of Convercent.

But the city and region still lack a few components to make it a truly "global" center of innovation, including more breakout tech companies reaching the IPO stage.

"We need a big success, we need an IPO," said Pete Khanna, CEO of TrackVia. "We also don't have enough angels. If we have more successes with anchor companies, you're seeding the market. We need success stories."

"I agree that we need as much emphasis on early capital as we can," Zell said. "We need a couple of other companies to come anchor here."

David Kallery, president of Inspirato, said the Denver region is poised to take tech innovation up a notch.

"We have the ingredients to make this happen, and it's just a matter of time before we have a couple of big hits," Kallery said.

All three speakers praised the city and state's entrepreneurial and innovation potential.

"We're in a complete renaissance here," said Mitisek, who took over as CTA's CEO in April. "We haven't had this kind of energy since 2001. It's the entrepreneurs in this room that are that catalyst for tomorrow."

Russell, an Oracle executive who was appointed Colorado's Secretary of Technology by Gov. John Hickenlooper in 2011, said the state's reputation is changing.

"We've always been known for our beautiful landscapes, our fitness and our highly educated workforce," she said. "But the conversation has changed to this hotbed of entrepreneurialism and innovation."

Russell noted that Colorado has become the No. 1 state for 25-to-35-year-olds to migrate to, often without jobs waiting but with a sense of excitement about what the state can offer them and what they can offer to the state.

"That millennial generation is moving here," she said.

Mayor Hancock said Convercent is representative of the partnership the city wants to have with promising young companies.

"Convercent is a success story for our efforts to leverage startups in our city," he said. "We really are working to become the startup capital of the nation."

The city of Denver helped finance the renovation of Convercent's new downtown offices, and CEO and co-founder Patrick Quinlan said Convercent is offering its large meeting room for the tech community to put to use.

"This is a space that anyone can use for free," Quinlan said.

"We are dedicated to being a long-term, active part of the exciting shift happening in this entrepreneurial community," he said. "Today's event is a groundbreaking of sorts, as this new office will not only be the launchpad as we expand our business and recruit the area's brightest minds, but help further establish this region as the place to be for entrepreneurs."

Convercent, which employs 70, offers its clients an integrated suite for managing company policies, tracking employee education and streamlining case management while aligning with that company's values.

"IT is the heartbeat and soul of who we are today," he said. "You have carried us to this place, and we want to be one of the best cities in the world for a startup.

"You have a partner for life in the city of Denver."

Click here to view the Photo Gallery of this event.