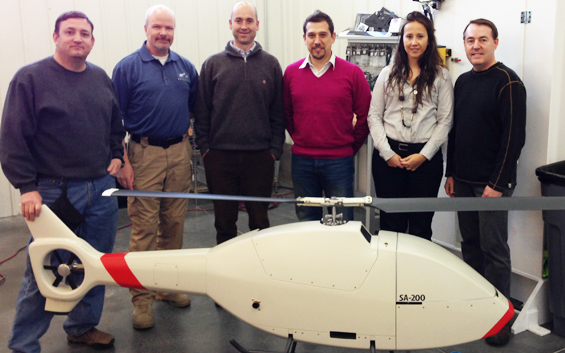 LOVELAND - Grupo In-Nova, a Toledo, Spain-based research and development company, is considering establishing a U.S.-based subsidiary operation in Northern Colorado after visiting the region last week, according to David Lung, a business development consultant contracted by the city of Loveland.

Lung said the company's owners and founders, Samuel and Esther Alvarez, visited the region along with Roberto del Navio, who Lung describes as his business development counterpart in Spain.

Lung, owner of Longmont-based DA2 Consulting, and del Navio, whose company is called BridgeGrowth, are partnering to accelerate technology transfer between U.S. and European federal labs, universities and high-tech companies with a focus on generating tech transfer and European business expansion opportunities for Colorado companies.

Grupo In-Nova, established in 2007, offers services that include advanced technology R&D in both the public and private sectors and coordination and management of R&D projects.

The company is active in Europe, Latin America and Asia but currently has no U.S.-based operations, according to its website. Lung said the company recently picked up its first defense-related contract in the U.S. which got them thinking more seriously about a U.S. expansion plan.

Lung said the company's visit turned out to be more than he expected.

"I think the challenge we have now is it ended up being much more than a business development trip than we expected it to be," he said. "It turned out to be quite the week, where they went home feeling really excited about Colorado.

"No longer was it if we do it, but how do we set it up and get started."

Del Navio agreed that the In-Nova visit was "very successful" and exceeded the company's expectations for "launching a subsidiary in the U.S. and specifically in the Northern Colorado area."

"As a result of the visit, the company has already launched strategic and business contacts with several Northern Colorado companies and institutions to start collaborations," he said.

Lung said the Alvarezes met with a number of companies in Northern Colorado and the Denver area, including Sierra Nevada's Centennial-based Intelligence, Surveillance, and Reconnaissance (ISR) Systems division.

Meetings were also held in Loveland at Scion UAS, DataTracks, Vergent Products, and YouSeeU, and also at Rocky Mountain Innosphere, CU-Boulder, Colorado State University and included tours of the CSU Powerhouse Energy Institute in Fort Collins and Rocky Mountain Center for Innovation and Technology in Loveland.

Lung said the RMCIT is being eyed by Grupo In-Nova as a potential site for a Colorado-based operation.

"It's up to them where they want to locate, but that's the location we were featuring," he said.

Lung said the Grupo In-Nova visit was the first opportunity for the BridgeGrowth partnership established last year to put into practice its goal of developing a "technology deal flow pipeline between Europe and Northern Colorado."

Del Navio said the time is ripe for creating more international business ties between the U.S. and Europe.

"Internationalization expansion is today a global priority in both Europe and the U.S.," he said. "We have seen there is a clear need from companies like In-Nova and other U.S. companies we are working with to be able to define an expansion plan in a new market, identify the right partners and later implement actions according to a growth strategy."

Lung said he feels confident that In-Nova will be launching some type of initial R&D-based operation in Northern Colorado within the next six months.

Lung was hired by the city of Loveland in 2012 to lead its Technology Acceleration Initiative, which aims to help Loveland build and grow its tech industry cluster.