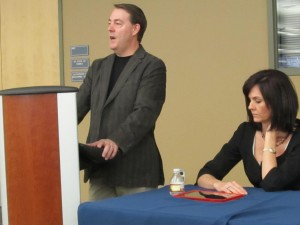 LOVELAND - A robotics cluster and a "Stone Soup accelerator" are two possible advancements on the  horizon for Loveland's tech transfer program, now entering its second year.

Local business owners, city council members and members of the city's economic development team met today to talk about the accomplishments of the program's first year and what's coming up during the second.

The program, headed by DA2 consultant David Lung, provided one-on-one consultation with more than 20 Loveland area companies last year, helping them focus on their needs to move their technology-related products into the marketplace.

Lung, who addressed Monday's gathering at the Rocky Mountain Center for Innovation and Technology (the former Agilent Technologies campus now owned by Kentucky-based Cumberland and Western Resources), said the first year revealed a strong base of companies and educational assets that could be the basis for the creation of a Northern Colorado cluster based on robotics, unmanned aviation vehicles (UAVs) and intelligent systems.

"Out of that (first year's experience) came an interesting picture of our community as a whole," Lung said, noting "more than 10" local tech-related companies doing business in that space and that Colorado State University and the University of Northern Colorado have strong programs that could be tapped into.

"The more we looked at this, the more we realized we have something unique going on in Northern Colorado," he said. "We started to refer to it as a robotics, UAV and intelligent systems cluster."

Lung said the second year of the tech transfer program will be highlighted by a series of "boot camps" in which companies can learn more about specific technology opportunities.

The first boot camp will be held April 24 and will focus on the cluster concept, he said.

Lung said another likely boot camp will focus on informing local companies about details of the proposed "Advanced Industries Accelerator Act" now working its way through the state legislature.

The act - if passed - would offer matching funds for companies falling within the advanced industries definition to help them commercialize their products.

Lung said Northern Colorado has the opportunity to become a leader in aerospace-related manufacturing.

"We have more manufacturing activity going on up here than anywhere else along the Front Range," Lung said. "I believe we could really lead an advanced manufacturing renaissance in Northern Colorado."

Lung said while other parts of the state have become centers of one aspect or another of the aerospace sector, "advanced manufacturing is the piece that's been missing."

Lung, a former Air Force officer with deep ties with NASA and the Department of Defense among other agencies, has already used those ties to help some local companies - including Scion Aviation - obtain federal contracts.

Betsey Hale, Loveland's economic development director, told those attending today's breakfast meeting that the city is planning to create a business accelerator called "Stone Soup," from the children's story of villagers pitching in to add ingredients to improve a "soup" of stones. 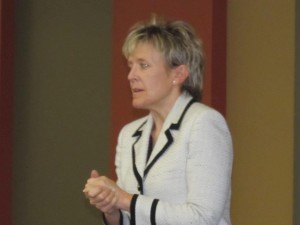 Hale said the accelerator - which has not yet been formally adopted by the city - would be based in the Cumberland and Western-owned RMCIT.

"It's about a community coming together and bringing the ingredients for success," she said. "We want this property to get filled. We want to create economic prosperity."

She said when a local company has been incubated and is ready to expand, the stone soup accelerator would kick in.

"The accelerator begins once it's been through incubation," she said. "That's what we hope happens here with the accelerator."

Hale said the effort will include city help but would be led by the private sector.

It will also be about bringing in-kind ingredients to the soup, Hale noted.

"If you're an architect or whatever, you can contribute to Stone Soup," she said. "It's not always going to be about money."

Hale said the Loveland City Council will be discussing the Stone Soup concept in detail at its next meeting on Tuesday, March 12.