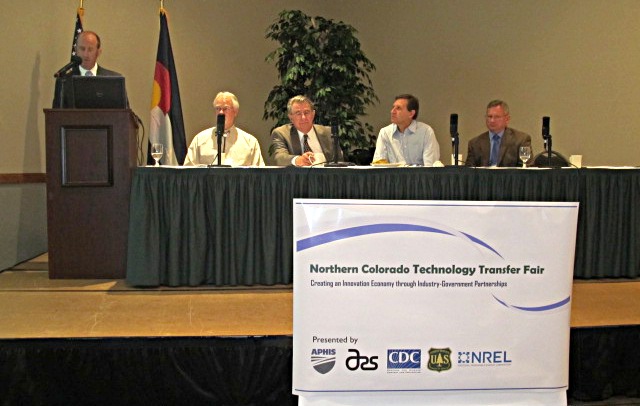 The free all-day event, held Aug. 7 at the Drake Centre in Fort Collins, brought together nearly 200 registrants who had a chance to meet with research laboratory representatives and learn how to cut through some of the confusion that can be daunting when first wading into government agency waters.

In addition to a panel discussion on how to dismantle barriers when working with federal laboratories, the event also featured roundtable discussions on small business and small tech transfer grants, Cooperative Research and Development Agreements (CRADAs), patents and licensing, commercialization and marketing and strategic local partnerships.

Birks said the region is fortunate to have many of the right ingredients needed to foster a "regional innovation ecosystem," which can translate into the creation of good jobs for local residents.

"We do have the assets and the ingredients," Birks said. "We have a whole host of assets and we need to think about how we can (create an innovation ecosystem) to an even greater degree."

But Birks said the city of Fort Collins -- which recently listed support of innovation as among its top priorities -- needs partners, including the two dozen federal laboratories located mostly along the Northern Front Range.

"We recognize we can't do it alone," he said. "That's why it has to happen at the regional level and involve multiple partners."

Birks said the city is taking a different approach to job creation by not "hunting" for a Fortune 500 company to come to Fort Collins but by nurturing companies already here and helping to build them into new Fortune 500 firms.

"Developing cutting-edge technology is only one part of the process," he said. "It must be transferred into the marketplace."

Ringer said NREL has developed policies that allow selected startup companies to bring in their equipment and set it up at NREL and work with NREL scientists to speed up the innovation development process.

"NREL has a wealth of assets to tap into as do all of the federal laboratories," he said. "They're all out there to be used by the people who want to come in and do the work.

"If you come with the right mindset and understand exactly what it is you want to do, the labs are a tremendous asset and we want to partner with you," he said.

The labs are already having a big impact on the state, amounting to $1.5 billion last fiscal year, according to Scott Sternberg, representing CO-Labs. Sternberg said the impact of federal laboratories was about $100 million in Larimer County alone in fiscal year 2010.

The technology transfer fair was hosted by the  Agricultural Research Service (ARS), the Animal and Plant Health Inspection Service (APHIS), the U.S. Forest Service, NREL and the Center for Disease Control.

Judy Lavelle, CDC health communications specialist, said planning for the tech transfer fair took about six months "to create a forum where the private sector could meet in one day all the (local) agencies."

"Having an event like this gives us a forum to show the collaboration that goes on all day long - all year long - both working together between agencies and with the private sector," she said.

"We do a lot of research, but we need the private sector to bring it to commercialization. That's why we need each other."