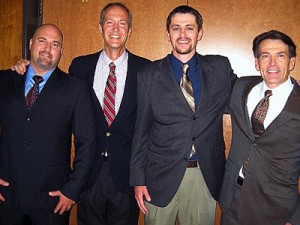 FORT COLLINS - Tim Bauer, Nathan Lorenz and Bryan Willson, founders of Envirofit International, have been named this year's Energy and Environment Innovators by The Economist magazine based in London.

Envirofit has grown from its initial concept at the Colorado State University Engines and Energy Lab to a worldwide company with 15 different models and 700,000 stoves sold in more than 45 nations.

According to the World Health Organization, cooking over an open fire inside a home is the equivalent smoke exposure of inhaling two packs of cigarettes a day.

Nearly half the world's population - about 3 billion people - cook over inefficient wood or dung-burning open fires inside their homes, which contributes to 4 million deaths each year.

"Indoor air pollution is a scourge that affects millions of people but gets far less attention than other forms of pollution," said Tom Standage, The Economist's digital editor and chair of the panel of judges that selected the Envirofit founders. "We are delighted to recognize the achievements of Envirofit's founders in tackling this problem."

The awards are described as the "Oscars of Innovation" and recognize not only innovative ideas but also the commercialization and adoption of those ideas.

Bauer and Lorenz were students of Willson and fellow CSU professor Paul Hudnut in 2003 when the company was founded. Their first product, funded by the Bohemian Foundation in Fort Collins, was a retrofit technology to reduce pollution from two-stroke cycle vehicle engines in the Philippines.

In 2007, Envirofit and CSU formed a partnership with Shell Foundation that helped the company build a viable and scalable clean cook stove business.

The stoves reduce smoke and toxic emissions by up to 80 percent and also reduce fuel use, cost and cooking time by up to 60 percent. The stoves cost between $15-$30 and have a life of about five years.

Ron Bills, Envirofit CEO and chairman of the board, said the company plans to sell 5 million stoves by 2020.

Bauer and Lorenz continue to grow the business as VP of sales and VP of engineering respectively. Willson is the director of the Energy Institute at Colorado State University and serves on Envirofit's board of directors.