FORT COLLINS - Three-dimensional printing is opening up doors to manufacturing once deemed impossible.

Three-D printing - also known as additive manufacturing because the item produced is built by adding layer after layer of plastic or metal - is capable of creating objects so incredibly detailed that it would be impossible or nearly so to make them through conventional machining processes.

The technology works by attaching a computer to a 3-D printer that reads the object's design and reproduces it in three-dimensional form, layer by layer. 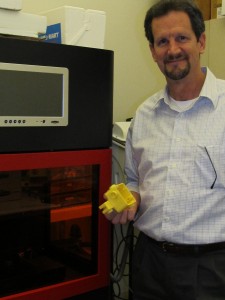 At Colorado State University, the School of Biomedical Engineering is rolling out its "Idea 2 Product" (I2P) laboratory to enable students, companies and the community at large to learn and use 3-D printers and turn their designs into reality.

"I realized 3-D was coming on strong in its ability to create things," said David Prawel, associate director of the Biomaterials Research and Engineering Laboratory.

"People want to prototype their ideas, but the ability to do that was so limited. They can now make these devices really quickly, basically overnight."

Plastic 3-D printing has been around for several years, but the printers are becoming ever more sophisticated and can now print in a variety of powdered metals.

The University of Colorado-Denver Anschutz Medical Campus in Aurora recently announced that its 3-D metal printer - one of only a handful in the state due to their cost of about $1 million each - could revolutionize biomedical research and advance prosthetics such as fingers, hands and arms by creating them with materials such as titanium and magnesium.

"It's a whole new way of thinking about how to make things," said Richard Weir, an associate professor in the university's Department of Bioengineering.

"The revolutionary aspect is to be able to do stuff that you can't using conventional technology. There is the possibility to fabricate impossible-to-machine components and to explore whether that confers advantage to the designs we're working on." 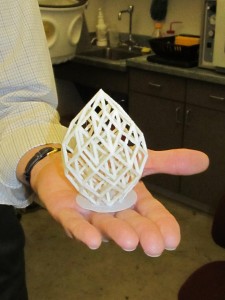 At CSU, Prawel said the I2P lab's 3-D printers can help innovators save time and money on developing their product prototypes.

"Our vision is an open access, cross-discipline facility for anyone to come and make things," he said. "I'm talking on the phone every day with people who want to try out an idea with 3-D printing."

The spectrum of products that can be made with 3-D printers is astounding - from simple components to intricate musical instruments, from artworks to vaccine models and even lifelike human ears.

"In the end, it's about innovation, about how people can get their ideas on the street faster and faster," said Prawel. "This is one of the most direct ways to accelerate innovation."

Three-D printing has been getting considerable attention lately. President Obama called it one of the most innovative possibilities for economic growth in his State of the Union address to Congress in February.

Earlier this month, Israel-based manufacturer Cimatron established a 3-D Printing Advisory Board to help the company identify "ways in which we can further our efforts to serve the global manufacturing market as effectively and innovatively as possible."

"By 2015, we believe the 3-D printing industry will be worth $3.7 billion, and a successful deployment by Cimatron in this market will provide it strong potential for growth," said Terry Wohlers, a member of the company's advisory board and owner of Wohlers Associates in Colorado.

On March 7, Nevada-based Massive Dynamics - a developer of leading-edge, consumer-oriented technologies and products ready for rapid commercialization - called 3-D printing the "Third Industrial Revolution," in which consumers can make their own products.

"We are truly excited," said Oscar Hines, Massive Dynamics president. "The 3-D industry is still in its infancy (but) additive manufacturing can change economies.

"Many products that we import today will soon be available for printing from our homes."

In Colorado, companies like LulzBot in Loveland are selling 3-D printers and supplies and making products for local businesses.

CSU's Prawel said he hopes the I2P lab will help innovators more easily cross over from an idea to an actual marketable product.

"You can't constrain innovation," he said. "You've got to put the tools out there and let people use their creative juices.

"It's a brave new world, and they're only limited by their imagination."