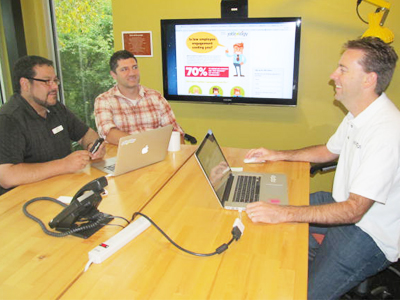 FORT COLLINS - CSU Ventures and Rocky Mountain Innosphere are partnering closer than ever before to provide a "Technology to Market Process" aimed at streamlining the path to commercialization for startup companies spinning out of Colorado State University.

Mike Freeman, Innosphere CEO, said the process will have a "common language" for everyone to clearly understand.

"The unique thing is we've mapped out a process most startups go through," he said. "The key thing is we're able to go back to the startup person and tell them where we think they are."

The process begins at CSU, where faculty members develop and license their technology with the Colorado State University Research Foundation (CSURF). After a startup company is formed, it can spin out into the Innosphere where it receives mentoring, financial assistance and can network with other companies also in the 14-year-old incubator.

Startup companies remain in the incubator or affiliated with the Innosphere as outside clients as the technology moves toward commercialization.

The new process is meant to help clarify where each startup is at every step of the way.

"It's not that complicated," Freeman said. "Unfortunately, there's lots of terminology out there and the problem is it gets incredibly confusing when you throw all this lingo out."

To be accepted as an Innosphere client, companies must meet certain requirements that are scored for entry.

"It just makes it more clear about what milestones they need to hit," said Freeman.

Todd Headley, CSU Ventures president, said the new system should make the movement of companies from CSU to Innosphere more fluid between the two entities.

"We wanted to all get on the same page with the same verbiage that would allow us all to work together," he said.

Ties between the two have been growing stronger in recent years, with CSU steadily increasing the number of faculty-created startup companies that move into the Innosphere for incubation.

According to CSU Ventures' 2012 Annual Report, the number of new startup companies spun out of the university more than doubled between 2007 and 2011 compared to the previous five-year period.

Also doubling during 2007-2011 were the number of CSU inventions and licensing revenue from those inventions.

That pace has continued unabated and even picked up in some aspects in 2012, the report said.

Now working with 35-40 startups at any given time, Freeman said he expects the Innosphere to graduate 8-10 companies each year. And many of those companies replacing the graduates are expected to come from CSU.

"We want to see at least 3-5 companies coming out of CSU into the Innosphere each year," he said.

Freeman estimated that about one-third of Innosphere's current clients are CSU-based spinoffs.

One such client is JobZology, a software startup that specializes in matching companies with talent.

JobZology spun out of CSU-originated technology in April 2012, with its founders accepting an offer from Freeman to move into the Innosphere.

Eric Leftwich, JobZology's chief revenue officer, said the company could have simply found an office somewhere in town but would not have had ongoing access to the on-site mentoring and networking the Innosphere provides.

"I feel we're a really good test case for what they've modeled," he said. "It's a powerful thing, to be in this dorm of inventors."

Freeman said he sees the Innosphere as part of a "startup ecosystem" in Northern Colorado that includes CSU's Research Innovation Center (RIC), the National Renewable Energy Laboratory (NREL) in Golden and the CSU Powerhouse Energy Institute campus now under construction in Fort Collins.

Also part of the technology channel from CSU to RMI is the Institute for Entrepreneurship in the CSU College of Business. "We definitely see the (Institute) as a pipeline for companies coming out of Colorado State," he said.

The Innosphere has devoted a significant portion of office space to The Hatchery, where outstanding student-created startups are invited to incubate alongside companies farther along in their commercialization.

Headley said the new "Technology to Market Process" initiative will definitely benefit so CSU but noted "It gives (RMI) a better look into our pipeline as well, so it benefits them, too."

Freeman said the new process is about to go into full operation as new companies are brought in to replace graduating startups at the end of the year.

"We have our third quarter application process under way and companies will go through this new process," he said.

Headley said the process should help further solidify an ongoing strengthening relationship between CSU and RMI.

"Working with Mike and RMI has really been productive for us," he said. "We're creating companies at a rate that might surprise you. But the point is to get them funded and started."

"CSU is extraordinarily productive when it comes to helping startups get formed in a university environment," he said.

"They are really a key stakeholder to us and we work really closely together. And that's why it works."