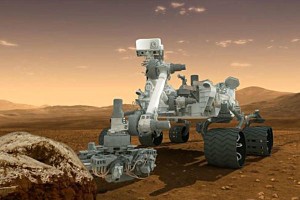 DENVER -- Americans of all stripes were transfixed during the so-called "seven minutes of terror" on Aug. 5 as NASA's Curiosity rover defied the odds and gently settled onto the surface of Mars.

After years of preparation and more than eight months in transit, the research vehicle was deposited on target near Gale Crater. Cheers rang out at mission control, but many in Colorado's aerospace industry community were equally jubilant.

That's because -- thanks to Denver-based Colorado Space Coalition -- many Coloradans had a hand in this amazing adventure in outer space. And arguably the most vital contributions came from three highly visible companies.

Centennial-based United Launch Alliance launched the spacecraft that took Curiosity to Mars. Lockheed Martin of Littleton installed the heat shield that protected the rover on its passage through the atmosphere. And Sierra Nevada Corporation Space Systems in Louisville helped develop the mechanism that lowered Curiosity onto the Red Planet. SNC also built the precision gearbox assemblies that power the rover's instruments needed to drill, collect and analyze samples of the Martian soil.

"That kind of exemplifies the breadth of Colorado's (aerospace) industry and its contribution to space exploration," said Vicky Lea, CSC Aviation and Aerospace Industry manager. "It's really worth pointing out that -- despite the doom and gloom of federal cuts coming down the line in January 2013 -- it's also a time for much opportunity for Colorado's aerospace companies."

Founded in 2003, the CSC is a group of industry stakeholders working to make Colorado a center of excellence for aerospace. Members include military leaders, academic organizations, space companies, research centers and economic development groups. The Colorado Economic Development Commission is a major financial contributor to CSC's marketing initiatives.

"Our strategy is to focus on target-industry clusters," said Lea. "Our region has a lot of strengths and assets we can leverage, including the four military commands located here."

Thanks in part to the efforts by the CSC, Colorado ranked first in the United States for its concentration of private aerospace employment in 2011. Direct employment for that year reached 24,890, encompassing 150 employers and accounting for one percent of Colorado's total employment base. The total cluster payroll reached $2.8 billion in 2010 alone.

Colorado State University is another contributor to this aerospace effort, working with the CSC as a member institution. University departments involved in the work include Mechanical Engineering, Electrical Engineering, Computer Sciences, Atmospheric Sciences and some aspects of the Business College.

"As we look at aerospace, not only do we have a role of building satellites and spacecraft and designing launch vehicles, but we also have experience in aviation and energy," said Dr. Ron Sega, vice president and enterprise executive for Energy and the Environment at Colorado State University and Ohio State University.

Sega, who was an astronaut on both the Discovery and Atlantis shuttles in 1994 and 1996 respectively, noted the aerospace applications coming out of CSU will have wide applications.

"The skillset in our aerospace community is also being applied to the area of networks and fiber applications, as well as energy," he said. "For example, as we build and fly satellites in Colorado, we have to think about energy and power. Our satellites have used renewable energy and control of those electrical power systems for decades. We need to make many of these things economical for use here on earth as well."

"We also work to expand networking and collaboration among the state's space companies," said Lea. "Another component is support funding for science, technology, engineering and math education in Colorado."

About the Author: Kate Forgach

Kate Forgach is a lifelong journalist and public relations specialist who has written extensively about science and business.