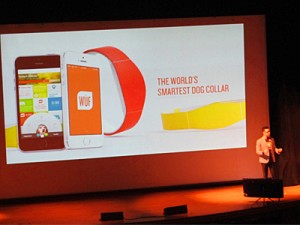 BOULDER - The first six startup companies to go through Boulder's newest accelerator program showcased their products and services to a crowd of about 500 investors, supporters and others Friday during Boomtown Demo Day at the Boulder Theater.

The startups covered a wide range of offerings, from amazing facial recognition technology to "the world's smartest dog collar."

"This afternoon is all about entrepreneurship - people who worked their asses off for the last 12 weeks," said Sean Lathrop, Boomtown's program manager and MC for the first-time event.

Boomtown was launched in January by four veterans of the Colorado startup scene, including Alex Bogusky, Toby Krout, Stephen Growth and Jose Vieitez. The accelerator also relies on the expertise of about 100 mentors with a wide swath of startup and successful exit experience.

Companies selected to take part in the 12-week program also receive $20,000 to spend on whatever they need during the program and are eligible for thousands more in professional services.

Sean Kelly, CEO of Wuf, said his company is offering "the world's smartest collar for dogs," with features that include two-way communication with one's dog through a phone app and an "invisible leash" that lets the dog know it is getting too far away.

Kelly noted the pet market is huge, with $62 billion spent in the U.S. each year, and Wuf is ready to claim a piece of it.

"We've got a uniquely positioned product that leapfrogs us over the competition," he said.

"6px changes everything," he said. "It is the all-in-one process for image processing."

Higginbotham said the platform was just launched and already has over 500 users. "The response has just been amazing," he said.

Dan Ripoll, CEO of Content BLVD, said his company is focused on helping to distribute sponsored content across a wide range of media channels.

Ripoll acknowledged that getting people to look at Internet advertising is not easy.

"We're all more likely to survive a plane accident than click through a banner ad," he said. "Advertising isn't going anywhere, but it doesn't have to be so annoying."

Ripoll said Content BLVD's platform is free to content providers while advertisers pay a subscription fee. And the company promises to make it a win-win for all.

"Great marketing adds to our experience, it doesn't take away from it," he said. "We have the opportunity to integrate advertising into content that actually excites people."

Ann Pierce, CEO of PhotoFeeler, said a person's photo image is more important than ever, with colleges and employers often checking prospective students and employees on the Web through their Facebook and LinkedIn pages.

She said PhotoFeeler aims to make that photo best express who the person is.

"We treat a person's profile photo as if it is the actual person," she said.

"PhotoFeeler helps us to be seen by the world the way we want to be seen."

Pierce said the company has experienced 12 percent weekly growth since it launched and expects to have 12 million users by the end of the year.

Moore said the technology is 99.6 percent accurate and can recognize a person even if they are wearing sunglasses, a mustache or a new hairstyle. "Chui will know," he said.

For the homeowner, Moore said they can "throw away their (house) keys" with the product.

Alex Kronman, CEO of College Press Club, said his company is offering a way for advertisers to reach millions of college students across the nation and help revive the field of journalism.

"We make it easy to buy ads in college newspapers," he said.

Kronman said 66 percent of college students who see an ad in a college newspaper take some kind of action in response to it. He said the company is already reaching more than 1 million students.

"Were not creating a market - we're just making it more efficient," he said. "That's our goal, and to make sure great journalism is sustainable."

During the afternoon event, Boomtown announced a partnership with Boulder-based Zayo Group - a global provider of bandwidth infrastructure -- that will establish a Connected Device Lab in downtown Boulder that will be accessible to Boomtown startup teams and the community.

The lab is expected to open in the fall.

Boomtown Demo Day was sponsored by Zayo Group, TriNet, SVB Financial Group, Kurtz Fargo LLP, Bank of the West and Japango. All proceeds from the event went to DevelopHer, a company that aims to increase creation of toys that stimulate girls' interest in science, technology, engineering and math.

Boomtown said it has selected its second class of startups that begins Aug. 25 with the next Demo Day set for Nov. 20.