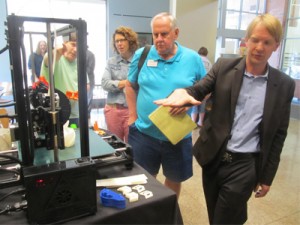 LOVELAND - Loveland Public Library visitors now have another reason to come to the library besides checking out a book.

They can build their own three-dimensional object.

The library recently became home to a LulzBot TAZ desktop 3D printer, which - with a little direction from some software - can create a toy, charm or almost any type of object or part from a roll of heated plastic.

The printer, made by Loveland-based Aleph Objects, symbolizes a revolution in manufacturing, with consumers now able to produce objects for their own particular needs and projects.

Jeff Moe, LulzBot CEO, said the 3D printer was donated to the library with the assistance and partnership of the city of Loveland, the Community Foundation of Northern Colorado and Friends of the Loveland Public Library Foundation.

Moe said his company wanted to demonstrate 3D technology to the community so people can see for themselves its possibilities. 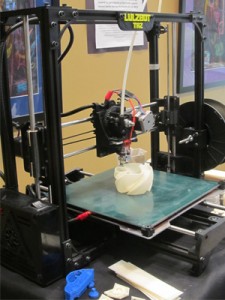 ""We want to get it out to the public because it is the future," he said. "Basically, 3D printing has a huge future because it's a transformative technology."

Moe said the transfer of technology is sometimes a two-way street, noting that customers have helped develop the LulzBot printer, now in its fourth-generation.

"We get a lot of good innovations from customers," he said. "The good ones we integrate into the next generation of machines."

The LulzBot printer costs $2,195, but Moe said his company offers free software and plans for building a printer.

"This is actually an open hardware device," he said. "All the plans we share online so they can learn all about the machines."

Moe said his company subscribes to an open source philosophy with the 3D printer.

"As Red Hat is to software, we are to hardware," he said. "We're very much about creating an open culture."

Marci Erion, who heads the city of Loveland's Office of Creative Sector Development, said making the 3D printer available to the public was the right thing to do.

""This is really an amazing and unique opportunity for our community," she said.

"As far as from an economic standpoint, this is really  important," Erion said. "3D printing is absolutely the trend now and the global trend moving forward. We want to be part of helping develop that future workforce."

Erion said the local business community has been wanting to learn more about the technology.

"We've had business members reach out and say, thank you, we need this technology," she said.

Shane Adamson, Loveland Public Library's manager of library technology, said the library is still developing policies for the printer but won't allow weapons or objectionable objects to be made.

"Anybody can come in and print almost anything they want," he said, noting that there is no cost for use of the printer. "Right now, we're just going to charge for materials."