WESTMINSTER - It did get a wee bit WILD. 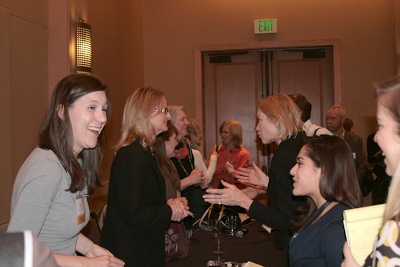 Women Inspiring Leadership Development was the theme of the inaugural WILD Summit presented by the Deming Center Women's Council and CU Leeds School of Business, and more than 400 female professionals, educators and students converged at the Westminster Westin Hotel to share their progress, setbacks and ideas for expanding business opportunities for women.

Ballroom and meeting rooms were full-to-overflowing to hear the likes of Ogilvy & Mather advertising executive Shelly Lazarus and extreme outdoor sports enthusiast Wendy Booker provide perspectives on where women have been and where they're going.

Lazarus, the event's keynote speaker, set the tone for the conference by noting that with all the "firsts" women have accomplished--first female astronaut, Secretary of State, prime minister, university president, etc. -- are simply distractions to real progress for women in the workforce.

Women comprise 51 percent of the population yet are still vastly underrepresented in corporate boardrooms, high political offices and other positions of responsibility. Women, for example, hold just 4.2 percent of Fortune 1000 CEO roles.

"Although we're in places our mothers never expected us to be, we might have expected to be farther along by now," Lazarus noted.

Lazarus traced her path to the top of Ogilvy & Mather as a journey she took without sacrificing her family for her career. The mother of three and 40 years married to a pediatrician, she joked that she followed her man to Columbia University and earned a Master's degree in order to avoid having to take a job as a typist.

"Thank heavens we've retired the idea that a woman can do it all," Lazarus said, adding balance is key.

"Make sure you love your job," she said. "You'll love your children -- but joy in your job gives you balance in other parts of your life."

Lazarus shared a story about forgoing a big Federal Express strategy meeting so she could attend her son's field day at school--much to the consternation of executives.

With 25 high-powered marketing people gathered for the meeting, her absence wouldn't be missed, she reasoned. The same couldn't be said of her son. "He was eight years old. He would remember that Mom wasn't there."

"Ask the people around you to respect your priorities," she said. "First, become indispensible and then tell them what you need. Courage is essential to getting what you want in life."

Lazarus also noted that women are gender-wired for success in business. They're great team-builders and are good at getting things done. "We don't have the alpha male thing going. We know how to share, communicate and say thank you," she said.

In a changing economy, women are launching new businesses at record rates. They're also shaping traditionally male-dominated industries, and devising new approaches to business and education that address women's and family concerns.

This was especially evident in panel sessions covering social and sustainability ventures and natural foods. Women are using their nurturing talents to improve the world while seeking to make a profit. Putting good business practices into play can pave the way out of poverty for many women.

For example, Stacey Edgar founded Global Girlfriend in 2003 using her family's $2,000 tax refund to buy hand-made goods from poor African women. When the items arrived, she called friends and held a gathering (ala Pampered Chef-style) and practically sold out of everything--scarves, clothing and jewelry-- in a single night. Global Girlfriend, a "fair trade" business, has grown into a $7 million enterprise. The company initially obtained goods from seven women; today, Global Girlfriend trades with more than 65 women's organizations world-wide.

Edgar came into retailing from a social work background. She knew that of the 1.3 billion people living on less than $1 per day, 70 percent are women. Business opened a door to a better life for some of them by providing a paycheck and a way to feed, clothe and educate their children, she said.

"But you have to be disciplined," she warned. "Don't let the 'helping' get in the way of quality. You have to maintain good standards, good products and good business practices. That's how you help."

Erin Weed launched her business, Girls Fight Back, after her sorority sister and closest friend was murdered during her senior year in college. Her friend fought back, and her attacker is serving life in prison because of the evidence she left behind in her struggle.

Weed didn't want to be ruled by fear and sadness. Inspired by her friend, Weed learned self-defense from some "pretty scary people." Based on multiple martial arts disciplines, she developed a live, 90-minute presentation to empower young women to protect themselves.

Girls Fight Back trainers go into high schools and colleges to teach the "bad-ass ballet." These educators have shared their courage and safety strategies with more than a million young women.

Weed got attendees on their feet to learn some basic " bad-ass ballet" moves. Hands-up, eye contact, speaking with authority, and a few well-placed elbow and knee jabs in case of a physical confrontation, got the participants psyched.

Closing speaker Wendy Booker sent attendees home on a high note. Author of "New Altitude: Beyond Tough Times to the Top of the World," Booker shared her mountain-summiting journey. She's climbed six of the seven highest mountains, made two attempts of Everest, and completed 10 marathons - all after being diagnosed with multiple sclerosis. Booker has propelled herself to the geographic top and the bottom of the world as well, getting to both the North and South Poles via skis and dogsled.

"Self-discovery, serendipity and stubbornness" are the three "S's" that have motivated her to overcome life's obstacles, she said.

Event chair Cindy Carrillo, speaking on behalf of the Women's Council, said she believes the WILD Summit will become an annual event. With sold-out attendance and overflow seating required for the first summit on Feb. 1, the event's steering committee will be considering a larger venue in 2014.