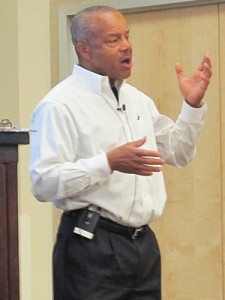 FORT COLLINS - Artists, authors, inventors and other creative innovators had an opportunity to learn about the legal, health care, product patenting and career nurturing aspects of self-employment at the fifth annual Quid Novi Conference held Saturday on the Colorado State University campus.

Quid novi is Latin for "what's new," and for the fifth year conference organizer Rick Griggs gathered a variety of experts to address those issues and to help "creatives" network and learn the latest information to help them better manage their creative endeavor.

Griggs is an author, publisher and creator of Griggs Mastery Academy.

The theme for this year's conference was "Crossing Boundaries to Market Creative Output," and Griggs said the day-long event aimed to help normally independent creative types shed their reservations and get to know others in the same boat.

"You're going to rub shoulders in many kinds of areas and do many kinds of things today," Griggs said in his opening remarks to those attending.

Griggs related a personal story of eating horsemeat in Europe and overcoming his discomfort with the idea.

"When you move out of your comfort zone, the first bite can be a little repulsive but then you can really learn something."

Carrie Pinsky, founder of Pink Sky Career Counseling, was one of Saturday's speakers who helped attendees shed some inhibitions and stretch their ability to be creative and reach out to strangers through a series of creative exercises. 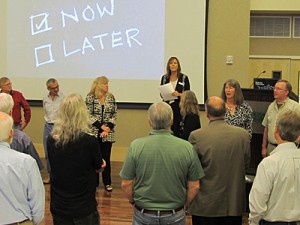 "It makes people happy to be creative," Pinsky said. "It inspires people and gives them a sense of purpose."

And that also translates to those who are part of a bigger organization as well as solo entrepreneurs, she said.

"If you are creative, you are indispensable," said Pinsky. "You're the outlier that can help solve big problems.

"It's the creativity in us that draws people in and it inspires other people to be creative."

In addition to Pinsky, this year's Quid Novi speakers included Julie Wenzel, a Health District of Northern Colorado staff member who held a workshop on "Demystifying Health Care for Authors, Inventors and Creatives."

Griggs said the goals of the event were twofold: to give support to creatives ("they deserve it and they need it") and to get those attending - who were coming from many different creative directions -- to spread their wings.

"We want to get creatives to cross boundaries, and if they do that they'll be creative like no other," he said.

"If you can cross over to another field of being creative, you're going to find something you need."