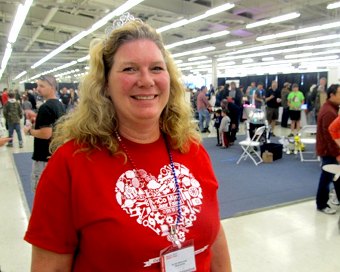 LOVELAND - After months of planning and preparation, organizers and volunteer supporters saw their efforts pay off as thousands streamed into Colorado's first major  Maker Faire on Saturday.

Inside the Rocky Mountain Center for Innovation and Technology - generously loaned for the day by owner Cumberland and Western Resources -- kids of all ages wandered through 100,000 square feet of arts and crafts demonstrations, scientific presentations, and took part in hands-on activities that brought smiles and laughter to those who decided to spend part of a beautiful Saturday attending the NoCo Mini Maker Faire.

For Elise Weiland, the day was the culmination of months of organizing, networking, support-seeking and some sleepless nights wondering if the whole thing was really going to happen.

But it did, and Weiland joined the smiling throngs with a big smile of her own.

"The whole day has been a joy," she said. "I woke up thinking today is just like Christmas."

The parking lot at the former Agilent campus in south Loveland provided the first visual affirmation that the inaugural event was finding strong interest by the mostly families who streamed into the event.

"People just keep coming," said Bud McGrath, a Maker Faire volunteer. It's amazing. We were hoping for something like this, but you just never know until it happens."

Robots could be found everywhere throughout the cavernous RMCIT structure, enchanting children who weren't taking part in ongoing hands-on activities like the Nerdy Derby car races and the simple Cardboard Challenge to make something cool out of tape and cardboard.

The event featured about 150 booths of "makers" who shared their love of craftsmanship and technology with wide-eyed visitors who weren't pressured to buy anything.

Marcie Erion, director of the Office of Creative Sector Development with the City of Loveland - one of the event's key sponsors and supporters - spent the day helping with trash removal and other necessary functions along with other city volunteers.

"I think it's amazing - far more so than we had anticipated," she said. "Again, I think it proves that (recent) Kauffman Foundation survey that said Loveland and Fort Collins is a high-tech community.

"This really shows it's true." 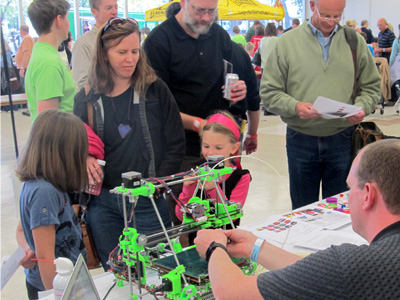 Erion said holding the event in the former Agilent campus was a milestone for the city. With the Maker Faire, a FEMA flood distribution center and a horse show going on simultaneously, it marked the first time since 2000 that most of the campus was occupied.

"It's been a good opportunity for the community to reconnect with this place," she said.

The NoCo Mini Maker Faire is a spinoff from the original Maker Faires started in the San Francisco Bay area in 2006. The do-it-yourself, crafts and technology movement has been spreading across the country since then.

"The reason this worked is because there have been so many people all along the way that's shared in it," Weiland said.

For Weiland, Saturday's turnout was a sweet payoff to a long and sometimes doubtful effort.

"Numerous people have said when you first told me about this I didn't think you'd be able to do it.

"But I can't tell you how many people have come up to me today and said thank you so much for doing this."

Click here to view the photo gallery for this event.

As a sponsor, and a promoter of TEDxFrontRange, we were blown away by the crowds. An awesome event for Loveland and a chance to show off the RMCIT. Hats off to Elise Weiland!