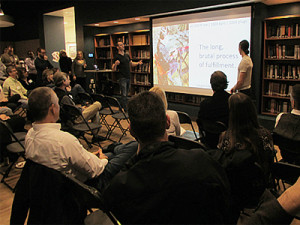 About 60 people attended the most recent New Tech Fort Collins meetup on Feb. 10 at Numerica Corp., 5042 Technology Parkway in southeast Fort Collins, to have a few beers, feast on munchies and hear presentations on crowdfunding.

At the February meetup, David Hunt and Dan Vinson, founders of The Wild Gym and inventors of Monkii Bars, enthralled attendees with tales of their efforts to organize a Kickstarter campaign to raise $25,000 to launch their startup.

The most dramatic aspect of the campaign involved Vinson hanging from a hot air balloon over Longmont. The stunt got media attention, first from the local newspaper and then by national media that included Huffington Post and ABC News.

"It was a total stroke of luck, but it gave us this social media clout to get us started," said Vinson.

The pair eventually raised a total of $111,178 from 971 backers and got their business rolling.

Callahan said the average crowdfunding raise is $7,000, but much more can be collected with the right strategy.

"Anything's truly possible in crowdfunding but it takes a clear, well-executed plan to accomplish it," he said.

"You need to tell a great story about your product," Wolfe said. "The most important thing is having a great video that tells a story that's cool."

"I think they're extremely valuable for people to see what's going on in the (tech) community," he said.

Another attendee, John Kerson, said the meetups have given him some insight on gaining funding.

"These (meetups) are great, and I come to hear people sharing about where they are getting resources," he said.

Charisse Bowen, who will direct the new Galvanize campus in downtown Fort Collins when it opens in July, is the current New Tech Fort Collins organizer.

Bowen took over the role from Terry Stone, who took over from original organizer Christine Hudson. Bowen said "the timing was just perfect for me" to step in and take on the organizer role.

"I was looking for ways to get back into the community," said Bowen, who had served as director of Colorado State University's Venture Accelerator in the College of Business before taking a job with Denver-based Galvanize last year.

Bowen said a new format for the New Tech Fort Collins meetup group is to have monthly themes so attendees can know in advance what the meeting will focus on.

Next month's meetup theme will be on the Internet of Things, followed by incubators and accelerators in April. Other meetups will spotlight young entrepreneurs, mobile software, financing, information security, social technology, regulatory hurdles and biotech.

Bowen said attendees will also have occasions to practice their business pitches but that will not be a focus of the meetups.

"There's plenty of other opportunities for that," she said.

The New Tech Fort Collins meetup is the third of four to be established in Colorado under the banner of New Tech Colorado.

The first, New Tech Boulder, was established in 2006 by Robert Reich. In addition to Fort Collins, there are also New Tech groups in Denver and Colorado Springs. The four New Tech meetup groups now have a collective membership of more than 10,000 members.