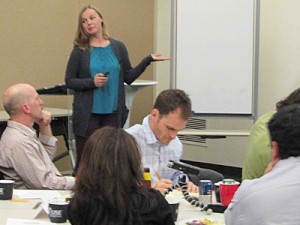 FORT COLLINS - It's one thing to pitch your startup business idea before a panel of potential investors, but quite another to make a presentation before a group of anonymous people who only want to help.

That's the focus of House of Genius, a collaborative model of startup support created in Boulder in 2010 and now in Fort Collins.

Under the House of Genius model, select community volunteers listen to 5-minute presentations, ask questions and offer their observations and suggestions for sharpening those presentations.

Key to the model is anonymity - meaning the sessions are held with volunteers not revealing their last names or what they do. The goal is to cast aside any preconceived notions about anyone in the room.

"House of Genius has a very unique persona," said Eric Leftwich, chief revenue officer for jobZology, who served as moderator for the three-hour event. "Anonymity brings about great dialogue, and when we can build on each other's comments, that's when true genius comes to the table."

Each presenter was the focus of an hour-long exploration of their company's offerings, its obstacles to success and potential insights for overcoming those obstacles or modifying business goals.

At the conclusion of the evening - during "The Big Reveal" - everyone on the 19-person panel revealed their last names and backgrounds. Most were entrepreneurs themselves, with a sprinkling of educators, consultants, scientists and a few with almost no entrepreneurial background.

Those varied perspectives made their input interesting and very helpful, presenters said. 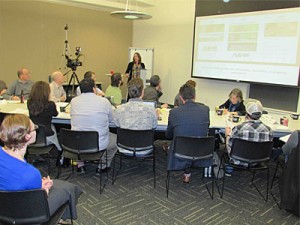 "I learned a lot about how to tell my story," said Dewey whose company - Animal Diversity Web - aims to provide detailed animal information to parks, zoos and museums.

"It was really helpful to get those other perspectives."

Ayers, whose company - Get Media Happy - aims to connect magazine editors with products to feature in their publications, said she appreciated the House of Genius input.

"I think I got a lot of great feedback," she said. "Being so involved in my business, it's easy to lose perspective. I think it's totally useful.

"I'm definitely going to go home and make a list of what I heard and implement some of it."

Among the anonymous panelists was Toma Bedolla, one of the founders of Boulder's House of Genius. Bedolla congratulated Fort Collins on being the 26th city in the world with a House of Genius community.

Bedolla said the anonymity part of the House of Genius model is key to its success.

"Let go of the job titles because that's how conversations get started," he said. "I'm really excited about where these things can go."

Simla Somturk, an organizer for the Fort Collins House of Genius, said the sessions - which are expected to be held every other month at first with a goal of eventually having one every month.

Somturk said House of Genius relies entirely on volunteers to recruit panelists and presenters and upon sponsors for financial support.

"House of Genius exists solely to support entrepreneurs," she said. "It's not an individual endeavor, and each of you are here to help create that community."