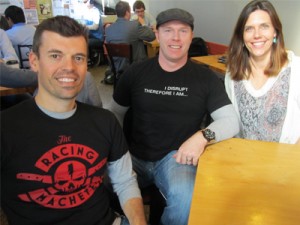 Now Fort Collins is about to join the club.

A group of local organizers is taking on the challenge of hosting a "Startup Week" in the Choice City in May.

Snook said FCSW - set for May 20-24 - will be "a celebration of everything entrepreneurial in Northern Colorado, from leading-edge tech to social innovation, maker labs to music, tasty hops to leaps in bioscience and some of the coolest and quirkiest main street establishments anywhere in the country."

The event comes on the heels of Boulder's Startup Week, May 15-19, and culminates in the inaugural $250,000 Blue Ocean Enterprises Challenge business pitch competition on May 24.

The Challenge was part of what inspired Snook to take on organizing FCSW, he said.

"I wanted to put a wrapper around it and make it broader than a pitch competition so it becomes the pinnacle of the week, kind of a crescendo," he said.

Snook said FCSW is intended to unite the entrepreneurial community across Colorado's Front Range and "celebrate the great companies, people, innovation and ideas happening in our city and state."

The week will include presentations, panels, workshops, happy hours, social events, job fairs, bike races, beer and music. Keynote speakers and sponsors are now being set and will be announced soon.

Snook said the city of Fort Collins has given its initial endorsement of the downtown-focused event. Seonah Kendall, the city's economic policy and project manager, said she's waiting for more details on FCSW, but the city is interested and supportive.

"It'll be great to see all the entrepreneurs and the economic activity from that," she said.

Last summer, a study by the Ewing Marion Kauffman Foundation placed Fort Collins-Loveland No. 2 on its list of Top 10 Metro Areas for High-Tech Startup Density.

Five Colorado cities placed on the Top 10 list, with Boulder No. 1, Denver No. 6 and Colorado Springs No. 9.

Henley, a Colorado native who moved away from the state but who was recently drawn back to it, said Northern Colorado in particular is becoming a magnet for startup entrepreneurs.

"What we've found is Northern Colorado is really attracting some movers and shakers, people who made a conscious decision to move here," she said.

"They lived elsewhere, but wanted to be part of the grounded, innovative community here."

Snook echoes that conclusion. "There's a thing about Fort Collins that works," he said. "It's an interesting hybrid of progressive but also grounded. And all of this (FCSW) is another opportunity to showcase what we already are."

Snook said he's excited about the idea of Fort Collins having its own startup week.

"People are going to come here and think they're in Disneyland," he said with a smile.