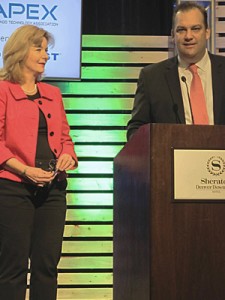 DENVER - More than two dozen speakers, a dozen breakout topic sessions and an homage to its 20-year roots were part of a full day's activities Thursday at the 2014 APEX Conference hosted by the Colorado Technology Association (CTA).

The theme of this year's conference was accelerating company growth through leadership, culture and innovation, and breakout panelists covered a wide variety of related topics in rooms packed with attendees.

Everything throughout the day was designed to highlight Colorado's growing technology sector, a powerful force in the state's increasingly robust economy, said Erik Mitisek, CTA CEO.

"This year we want to showcase the very best of technology, the companies and people who are moving technology forward," he said.

Morning keynote speaker Don Peppers got the day off to a fast start with a strong message about how to maximize customer experience.

Peppers, founding partner of Peppers and Rogers Group, said creating a customer experience that is as frictionless as possible leads to long-term loyalty.

And that means being customer-centric, he said.

"The secret of customer loyalty is a frictionless experience that removes obstacles," he said. "Being customer-centric means treating different customers differently. And to do that, relationships are required because - then - customers remember you."

Peppers cited Amazon as an example of a company that has figured out how to remember each particular customer and their interests to make them feel they have a mutual relationship.

Peter Sheahan, founder and CEO of Denver-based global consultancy firm Changelabs, shared the morning keynote session, offering insight on how to turn challenge into opportunity and change into competitive advantage.

Sheahan said it is difficult if not impossible to predict the future by holding onto wrong assumptions.

"The most important thing is to question your assumptions throughout the period of change," he said. 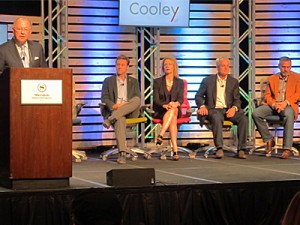 A highlight of the conference came during lunch, when Bob Newman, one of the original founders of the association in 1994, reminisced about the group's humble beginnings in a year that saw the founding of Amazon and the fifth birthday of the Internet.

"I think we've met our (original) goals," said Newman. "Nobody in our (founding) group thought we would be where we are today."

CTA, an industry advocacy organization, in 2014 represents more than 5,500 tech companies across the state including more than 750 members. The not-for-profit organization hosted about 900 registered attendees at Thursday's conference.

In honor of Newman's contributions to the CTA and the economic vitality provided by the state's tech sector, Mitisek read a proclamation from Gov. John Hickenlooper's office declaring Nov. 20, 2014 "Bob C. Newman Day" in Colorado.

To view a photo gallery of the APEX Conference, visit here.