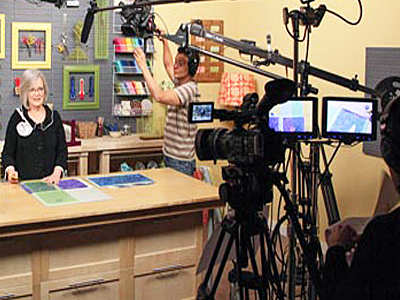 DENVER -- Online learning has taken a gigantic leap in becoming more accessible and personal, thanks to the efforts of Denver-based company Craftsy.

"We want people to be able to learn their own way," says John Levisay, company founder and CEO, referring to Craftsy's curated, interactive, anytime-anywhere learning platform.

"When we started looking at this, we felt that the promise of online education was not being fulfilled," Levisay says. "We studied online education and found it was often a Power Point with a voice-over or a camera in the back of a classroom. Definitely not as good as being in the classroom.

"So the vision was to capture the magic of a live classroom and not have it just be a passive experience. We wanted to make it interactive with fellow students and instructors and also leverage the idea of accessing anytime, anywhere and any way you want."

Craftsy currently offers more than 600 full-length HD courses across 16 categories, with another 500 to be added by the end of 2015. Categories range from quilting, sewing and knitting to cake decorating, and from cooking to photography, metalsmithing and jewelry-making.

The easy-to-follow HD video lessons can be accessed on a computer or mobile device. Particular areas can be bookmarked and returned to as often as the student wants. In addition to educational content of the classes, Craftsy members enjoy a large shared-interest community as well as a marketplace for patterns, supplies and project kits.

Craftsy was founded in the spring of 2010 by four tech guys (Levisay, COO Josh Scott, CTO Todd Tobin, and VP of engineering Bret Hanna) who were looking to create a new, high-quality approach to on-line learning.

The company launched in May of 2011, and Craftsy quickly found its market, having recently surpassed five million registered members from more than 180 countries. Craftsy, which is owned by parent company Sympoz, also drew the interest of venture capital investors because -- for a relatively small cost -- it creates virtual, tight-knit communities over hundreds of vertical markets.

The company has raised $58 million in venture funding from Tiger Global, Foundry Group, Adams St. Partners, Access Venture Partners and Silicon Valley Bank since its founding. It pulled in $23 million in revenue in 2013 and -- in January of this year -- found itself in the No. 19 spot on Forbes' list of America's Most Promising Companies.

New students are continuing to arrive, -- with a paid class enrollment every 18 seconds -- and the approach is winning praise. Student Dee Joyce, a massage therapist from Dover, New Hampshire, says, "What a great vision they have. I have a learning disability and have trouble staying focused. I was frustrated in classes because when I'd come away from the class I wouldn't remember half of what I learned.

"That's the beauty of the Craftsy world for me, because I have to read it or do it several times before I really know it. I can always go back to this site for reference or a refresher course."

The ability to interact is also helpful, she says. "For my learning style, I don't usually do well in a classroom, but I like being in a class because of the interaction. With Craftsy, you still have that. Plus, the instructors are so easy to listen to -- they are just amazing."

Levisay says Craftsy has not just been an effort to get classes online.  "We never endeavored to democratize the supply side of the education equation. We wanted to curate the supply side, handpick the best instructors and facilitate high-quality video production so we could give the world's best instructors in these areas a venue to monetize their expertise."

He explains: "If you are an expert quilter right now, you have few ways to really earn money. You can write a book, teach at live events or go on TV, but you're not paid a lot for that. So this gives these experts who are such great artists and teachers a way to make money from their craft and their trade."

Stefanie Japel has been teaching knitting classes since the beginning. Her experience has been phenomenal, she says. "They are so professional and, at the same time, so kind. They pay for all of the flight, meals, hotel, and car service during the filming. In the crafting world, that's really rare.

"I've taught at yarn stores and had to taxi to the store, prepare my own materials, run my own copies. But, at Craftsy, they take care of everything and they make you feel special even after the filming. I receive a gift every Christmas."

Like the classes themselves, there's an interactive ability between company and instructor.

"They have an instructor liaison, so if I have any questions or I think of a good advertising opportunity, they are really good at listening and I think that's what has made them so successful," says Japel. "They have become part of the community and they have a lot of respect for artisans.  I would really encourage other instructors to consider sending a proposal for classes through the website. They are really open to meeting new people, and as they grow they will need new teachers."

Craftsy is also popular with its regular staff and was designated by the Denver Post as one of the Top Work Places in 2013 and 2014.

"We have a mission here to bring your creativity to life and everyone here is committed to that mission no matter their role," Levisay says.  "People work very hard and we challenge each other. It's a respectful place and it's fun. I think we really have a good culture.

"One of my goals is to make this the best job they've ever had. Most of us will work for 40 to 45 years or more. If you are going to spend significant time and a large portion of your life somewhere, it should be gratifying and a rewarding experience. That doesn't mean it won't be hard at times, but should be good."

Levisay says he's pleased with the company's direction. "When you do a startup, you dream it will touch millions of people's lives but you never think it's a foregone conclusion. We feel very grateful that we've found such great customers, instructors and employees."