DENVER --To say that Sana Hamelin is the cat's meow isn't far from the truth. She is, after all, an advocate for cat welfare and also gives them a place to yowl and carouse, but that's only part of the story.

But the biggest draw is the innovative means for connecting cats with potential families.

Vivienne Palmer, a Boulder resident, is one of those who made the connection. "I was looking for the cat of my dreams. I'd been looking for a cat for some time and watched Craig's list and was trolling local shelters and web pages. I looked into lots of options, even looked at show cats. I wanted a large, friendly cat and I was willing to take my time to find just the right cat."

Then Palmer saw a notice on the Internet. "It said, 'Everybody calm down. There will soon be a cat café in Denver.' Then a friend tagged herself at the Café, so I got my kids in the car and drove there. The place had such a good feel. I met Sana and told her "I want a big fat lover super cat.' She said, 'I have just the cat for you,' and she introduced me to Meatball. He was a mess. He had so many knots and had been with the Rocky Mountain Feline Rescue for a year."

Meatball was shy and standoffish at first. "Then, he rammed his head into my leg and when other cats came near me he let them to know to back off. I filled out the questionnaire and paid my fee." 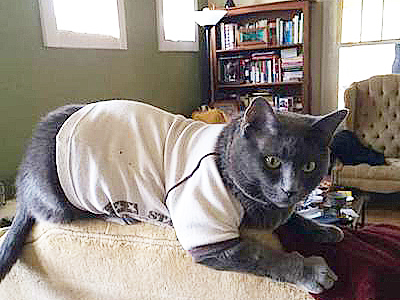 The experience was rewarding in another way, she says. "It was lovely to get to know a cat outside of the pound environment. It was such a relaxed atmosphere and I knew I wasn't condemning the others by only picking one. Rocky Mountain Feline Rescue is a no-kill (shelter), but when I was a kid, you knew the cats had one or two weeks if they weren't adopted so that's where I was coming from. Here, they were lounging around in a no-stress environment. It was also good to get her recommendation. I took him at her word and he is everything I want."

Meatball's name was changed to Timpano after an Italian dish, Palmer says. "It's like an entire Italian restaurant inside a crust.  He's just like that. He can please a crowd because he's full of good stuff."

For Palmer, the Cat Café is "a magical place. It was a special occasion for us and I'll definitely go back. If you love cats, it's just great. You can tell it's a labor of love for Sana."

It is, indeed, Hamelin says. It was also a detour in her life. She went to law school, graduating third in her class. "I thought I was set for a hot-shot career. I worked in two law firms but just didn't like working in an office. It was corporate litigation and the hours were horrible. I wanted to be independent, get out of the office and work more with people. I didn't want to be a lawyer."

The idea for Cat Cafés started in Taiwan in the late 90s and began starting popping up all over Asia in the mid 2000s, then moving to Europe. The concept is to feature cats in residence, with visitors purchasing entry passes to hang out with the café cats. A menu of beverages and snacks is usually available.

Hamelin had read about it online and was intrigued. Purina ONE® opened a "pop-up" cat café in New York last April to spark conversation about cat health and wellbeing. "It was open for four days and then was gone. It was a publicity stunt, and drew a line of people that went around the block. It became a U.S. sensation in the media because of that," she says. "The first official one was in Oakland and opened on Oct. 25, 2014. I invented my space on Oct. 2 and thought I could be the first."

She missed the mark because of a delayed zoning permit. The second one opened in Naples, Fla. two days before Hamelin's official opening on Dec. 12.

"Another one opened in Manhattan two days after us. That was followed by San Diego on Jan. 5. and Portland at the end of January."

It was just the career change Hamelin wanted. "I have always loved cats and wanted to do something retail-oriented. This seemed like the best way to do everything I loved in one place:  cats, art, books, creative elements, helping animals, working with the public and not being in an office. Everywhere it had been tried had been successful."

Her business sense was quickly demonstrated through the success: Since it opened, 18 cats have been adopted. Hamelin keeps them at the Cat Café until they are adopted and continually features eight cats from her partner shelter, the Rocky Mountain Feline Rescue.

"It's such a great idea and everyone has jumped on the bandwagon. I'm getting calls all the time from people wanting to open cat cafés all over the country."