DURANGO -- Sometimes asking a simple question or seeking a solution for what seems like a relatively minor inconvenience opens the door to a whole new world of possibilities.

The search for an answer led to the founding of Airborne Media Group, Inc. and the creation of Audioair. That, in turn, has opened up entirely new opportunities for sports bars, advertisers, retailers, casinos and many other establishments to actively engage with and provide interactive content to a large, interested audience.

Many sports fans want to hear the audio along with the television images of the game they're watching. The problem is, so does everyone else, and venues tend to keep all their TVs on mute, or put audio from one game on the sound system for the entire facility.

With AMG's Audioair, that's no longer a problem.

For restaurants, fitness centers, casinos, sports bars or other businesses where people gather, an investment in an Audioair system allows patrons to use their smart phones to tune into any available audio they want. Just download the free Audioair app for Android or iPhone and pick a channel being broadcast. 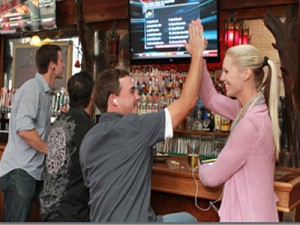 Users can listen in with their headphones, wireless earpieces, the speakers on their smartphones, or even a standalone tabletop speaker if everyone at the table or booth wants to hear. The system also allows listeners to chat with other users using the app, and check-in via Facebook.

AMG's CEO, Cordell Brown, notes there are a quarter billion muted digital displays around the world, and his company's technology provides a way for users to access the audio that goes with that video content.

At the same time, it gives locations that put those screens up an entirely new opportunity to connect with those viewing them.

"Right now, close to half of all Internet access is via a mobile device," Brown says. "But only 2 percent of digital ad spending is directed at those users. This is game-changing technology for local, regional and national advertisers, and gives them access to a targeted audience in an interactive way that didn't exist before."

The on-site, back-end technology at each location that offers the Audioair experience to visitors consists of a Wi-Fi system and an audio streaming box with proprietary codex to deliver the audio content; and on-site server to provide the ads and content designed to engage and enhance the users' experience.

AMG also provides a custom skin for the app for each location.

The upfront costs for the system range from $1,000 for smaller venues to five figures for a large casino. But Brown notes that the return on that investment can be substantial -- and realized quickly.

"There are 38,000 sports bars in the U.S., they're competing with one another and other types of venues, and an Audioair system helps," he said. "It gets new people coming in, it leads to customers staying longer and buying more. Audiences are broad, large and highly segmented."

A richer experience provided by engaging content helps generate income, and each location gets a share of revenue generated by ads that the system serves to that location.

In a pub venue, users might be able to order food and drinks or do some impulse shopping - buying the jersey of the running back who just scored a touchdown, for example.

A fitness center patron putting in some miles on the treadmill might order a new pair of running shoes for an upcoming marathon. Brown observes that, in 300 Mercedes-Benz showroom floors across the country, digital displays don't currently provide any audio content to luxury car shoppers.

Other venues where the system might be a fit include stadiums, airports, hotels, shopping malls, museums and performing arts centers, where dated technology is in place for the hearing impaired. Even popular destinations like New York City's Times Square, with its overwhelming number of billboard-sized displays. The technology can also provide different languages for the same video content.

As the venues where AMG technology can be used is quickly growing, so is the recognition the company is receiving.

AMG is the second-youngest company to be named a Colorado Company to Watch, based on an unprecedented four nominations -- including one from the governor's office. Forbes picked Audioair as the "Most Interesting Technology" from 275 companies at Launch Fest in March of last year.

The company and its technology has also captured the imagination of key players in Silicon Valley, where AMG has established a design-and-engineering development center, along with a network operations center in Park City, Utah.

But Brown makes sure to note that AMG is "Durango born-and- bred, and we will keep company headquarters and marketing based here."

Of course, when something as innovative as this comes to light, competition is never far behind.

"We're now in a first-to-market footrace," Brown admits. "Another competitor pops up every time we go to a trade show. But we have a good head start, and have been aggressive on the intellectual property front. We also think that competitors add validity to the idea - if no one else thought it was worthwhile and exciting, that would be troubling."

A number of other recent developments for the company hint at a growing list of markets and applications.

An agreement is in place with the Southern Ute tribe as a casino partner, and development of a betting platform is underway.

And a new brand is being created. The hiring of John Howe as chief operating officer is "critical," Brown says, to AMG's development of payment-processing capabilities.

Howe's experience as COO at Elliot Payment Systems -- pioneers in payment-processing technology -- includes overseeing 900 installs of their system each month. His specialized knowledge will be key as AMG focuses on mobile purchases and other monetization options.

Much of Colorado -- and beyond - will be tuned in to see how AMG takes advantage of widespread interest in Audioair technology and the opportunities it's creating.