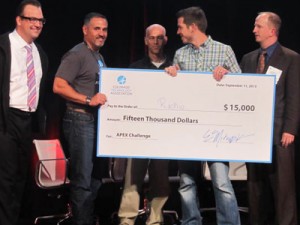 DENVER - Rach-io took the top prize of $15,000 in the 2013 APEX Challenge held Wednesday at the Hyatt Regency Convention Center and hosted by the Colorado Technology Association (CTA).

Rach.io, a developer of a water-saving smartphone application for home sprinkler systems, was chosen by a panel of judges and audience votes during the final presentation of CTA's annual APEX Conference.

Rach.io was also the winner of the $50K Glorious Failure prize awarded at the second COIN Summit in August.

Nanoly Bioscience, which has developed a technology to transport vaccines without the need for refrigeration in undeveloped countries, and branding specialists BrandFolder split $5,000 as APEX Challenge runners-up.

Ten Colorado startups were selected to pitch their companies during the APEX Challenge from more than 40 applicants. Others making four -minute presentations were Active Junky, Tagster, SplickIt, My Rounding, SeedPath, InteliVideo and Support Local.

The pitches came at the end of day of panel discussions on topics that included running an enterprise like a startup, Big Data and analytics, cloud security and the state of the state of technology in Colorado. 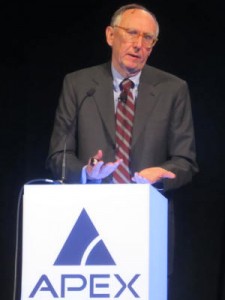 Dangermond said GIS-produced maps "deliver huge business value, making them more literate." He said companies like Colorado's DigitalGlobe are enabling the popularization of mapping, resulting in it "growing like never before."

"People are beginning to get it," he said. "This is a powerful technology because it's visual and people love it."

Dangermond said GIS technology has the power to help solve many of the world's problems if used to its highest potential.

"Our world is facing serious challenges," he said. "What are we doing about it? There's no collective thinking about the future over the next 50 years.

"This is going to take our best people, our best science and our best technology to create something that's actually sustainable."

The two-day APEX conference began Sept. 10 with a banquet that featured awards celebrating Colorado's technology excellence. Those receiving awards were:

Erik Mitisek, CTA's CEO, said Colorado has made huge strides recently in its recognition as a technology leader, including five Colorado communities - Denver, Boulder, Fort Collins-Loveland and Colorado Springs, grabbing four of the top tech city spots on a Top 10 list compiled by the Kauffman Foundation.

"Something is happening in Colorado," Mitisek said. "That's why we're here today.

"Colorado is really hot, and technology is the fuel for the future."

More than 60 exhibitors displayed their products and services during the conference. Key sponsors included ViaWest, FORTRUST, Comcast Business and Accenture.