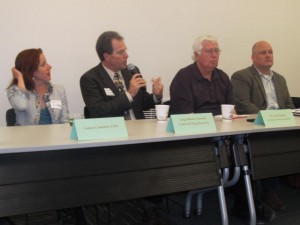 FORT COLLINS - A panel of experts on bioscience said Thursday that Colorado biotech companies face several challenges as the industry expands but noted that the potential for growth is strong.

One of the biggest challenges to that growth is securing funding for biotech startups.

"Cash is certainly the thing that everyone is looking for," said Lauren Costantini of the Colorado Institute for Drugs, Devices and Diagnostic Development (CID4).

But Costantini noted that state-funded CID4 offers grants from $150,000 to $600,000 to help bioscience and medical technology startups bridge the "valley of death" and get their products to the stage where they can obtain venture or other funding.

Greg Miknis of the Colorado Center for Drug Discovery said C2D2 can provide small proof-of-concept grants of up to $40,000 to help CSU faculty do the research that takes them to the next level of potential commercialization.

April Giles, Colorado BioScience Association president and CEO and panel moderator, said one significant pool of funding that may soon be available is through the just-introduced House Bill 13-1001, or "Advanced Industries Accelerator Act."

The bill, if approved, could provide millions annually to help Colorado-based companies accelerate commercialization of their products.

"The hope is there will be innovation across several sectors," she said.

"We're not as strong in biotech as we want to be, but we're creating some great partnerships," he said, noting a recently announced partnership with CID4.

Dr. Gary Luckasen, a cardiologist at Medical Center of the Rockies, said the hospital is involved with CSU in five new National Institute of Health grants this year and is actively working with five local companies.

"Our goal for this year is to be better partners with CSU and the community," he said.

"We feel we're going to fill the role of medical school for Northern Colorado," he said. "We feel this is just a win-win for everybody."

Another challenge for Colorado biotech breakthroughs is the competition coming from countries like India and China, some panel members noted.

"We have to be more competitive because a lot of this is being outsourced" to other countries," Miknis said. "China and India are now the major markets and will start to rival the U.S. in drug development."

NoCoBio's Scott noted that the "U.S. is not the best market for launching a new drug" because of the time it takes to get FDA approval.

But Luckasen said the U.S. is still a major player in drug development.

"The market is overseas for most of the early stuff, but it comes back over here so that shouldn't stop development," he said.

One other challenge for Colorado is the lure of biotech startups to leave the state to get closer to big companies and investor groups to more quickly advance their research.

"Some companies start here and then move to where they have big companies and big investors," Miknis said. "There really isn't a big drug discovery presence in Colorado."

But Costantini said the message should focus on the talent that does choose to stay in Colorado.

"We still retain enough talent willing to stay around and found their startup companies," she said. "Our strength is we grow great companies, and we should focus on talking about that."

The Jan. 10 panel discussion was held at the RMI startup incubator in Fort Collins and attended by about 75 people.