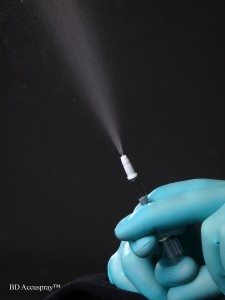 FORT COLLINS -- If things go according to plan, you could soon thank a wayward basketball for needle-free dentistry -- at least for your upper teeth.

Dentist Mark Kollar was tossing hoops with some friends when he took a ball to the face. The doctor who straightened his nose sprayed Kollar's proboscis with the anesthetic Tetracaine.

It was a Eureka! moment for the co-founder of the St. Renatus dental anesthetic, which requires a simple spritz up the nose instead of a painful shot to tender mouth tissue.

Currently, the drug only works on the upper teeth, but Kollar doesn't rule out future possibilities for the lower teeth.

Kollar has teamed with St. Renatus CEO Steve Merrick to bring the drug to market. As medical breakthroughs go, it's been a fairly short road to the phase-three round of efficacy studies commencing in mid-July. The patent for the drug was awarded in 2002, and the first two phases of safety studies were completed in seven years.

With phase-three trials starting next month, St. Renatus hopes the drug will receive FDA approval by early 2014 at the latest. Kollar said major pharmaceutical companies are already panting to get their hands on the drug.

Merrick, who previously ran Septodent -- the largest dental-anesthetic company in the world -- resigned to head up the Fort Collins-based company.

"Only 50-percent of people presently go to the dentist, and I'm hoping that's because of their fear of needles and pain," said Merrick. "Ultimately, what we're trying to do with this product is break an irrational fear of dentists that we develop at an early age. I'm hoping this drug, if it's as effective as we believe, will help break that cycle."

In addition to its pain-free application, the nasal anesthetic is easier on the kidneys, lungs and liver because the drug doesn't circulate in the body for hours. The process also means no more drooling from facial numbness when you leave the office because it wears off rapidly.

"Dentists are really excited about the drug," said Kollar.

The phase-three studies will test the drug on more than 300 patients being treated at dental schools across the country, including some as young as three years old.

"The process is pretty fast because the drug either works or it doesn't," said Kollar. "We don't have to watch for tumors or other long-term implications. One aspect we are dealing with is how the nasal spray will interact with other drugs commonly used by patients.

"If we track the way the project is looking, we'll likely submit our applications next year to the FDA," he added. "We're kind of doing this at light speed. There's a good chance it will be approved without too many bumps."

About the Author: Kate Forgach

Kate Forgach is a lifelong journalist and public relations specialist who has written extensively about science and business.

[...] long as injected anesthetics, it is less harmful to the kidneys, liver, and lungs, according to an article in Innovation News. And since its effect would wear off more quickly, it could mean less drooling [...]