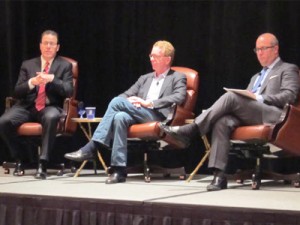 The vetted companies came from Colorado, Arizona, Utah, New Mexico and Montana with hopes of attracting investment to move their products - focused on cancer, multiple sclerosis, diabetes, Lyme disease, wound repair and a host of other bioscience challenges - toward commercialization and profitability.

The day-long conference kicked off with a breakfast keynote "fireside chat" featuring Kyle Lefkoff, founder of Boulder Ventures, moderating a discussion with the leaders of two of Colorado's premier publicly traded life science companies - Patrick Mahaffy, CEO and co-founder of Clovis Oncology and Ron Squarer, CEO of Array BioPharma, who shared their views on the state of Colorado's bioscience industry.

Both CEOs praised the Food and Drug Administration (FDA) for moving toward a more cooperative stance regarding approval of new drugs.

"Interactions with the FDA have been nothing short of remarkable, at least in our experience," said Squarer. "I get the impression that the FDA is there to provide more options for physicians and patients."

Squarer said that is a sea change from "when the FDA seemed to be there to prevent new technology from reaching the market."

Mahaffy agreed, saying the FDA "has fully embraced personalized medicine" and that "what we're able to deliver to the industry now is a big change."

But both CEOs also agreed that - while the state's life science industry has made huge strides - it still lacks some key elements.

"What we still haven't built is a stable core we can build around - some big established company that would allow for talent to come in (to Colorado)," said Mahaffy.

"We need a discovery-based enterprise that's first a magnet for talent and then starts spitting out new companies." 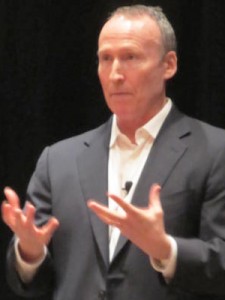 "It's hard enough to innovate at all, but very hard in big companies," he said. "They're not designed to reward risk-taking.

"You need people who can step outside the box, and it's not easy in a big company."

Calcagno said big companies are now reaching out to sponsor innovation and setting up regional centers outside company headquarters "to where the action is."

"The idea is we have to help these (innovative) companies along or it's not going to end well for all of us," he said.

"At Johnson & Johnson, the innovation engine is critical. You need to have groundbreaking innovation."

Calcagno said big companies and small companies must work together more closely than they have.

"Frankly, we are in this together," he said. "It's very hard to make it without partnering at some level. There's a common unifying factor between what you're trying to do and what we're trying to do."

Throughout the day, companies had a chance to meet one-on-one with potential investors. Rich Pollack, who attended the conference with a team from Boulder-based Prima-Temp, said the company's first attendance at the every-other-year conference appeared potentially fruitful.

"It's been good for us," he said. "We've had several meetings with potential investors."

April Giles, CBSA president and CEO, said the event is aimed at getting viable life science companies in front of those who may be able to help them reach their commercialization milestones.

Giles said any deals that may spring from the conference will likely take months to hatch, given the slower pace of commercializing bioscience innovations compared to other innovation sectors.

But Giles said Thursday's CBSA-hosted conference - the largest so far - appeared to be a success.

"I've talked to some investors today who said they were very interested in coming to Colorado, so that's wonderful," she said.

Click here to view the photo gallery for this event.

[...] The Colorado BioScience Association's conference also stands on multiple years of success. Launched in 2009 as a biennial (every 2 years) conference, it brings startups from 5 states: Colorado, Utah, New Mexico, Arizona, and Montana. The 1-day event featured 30 big investors from Colorado, both coasts, and in between: VC's, public company venture arms, and Angel investors. 30 startups also presented, pitching for everything from angel rounds to getting ready for an IPO. InnovatioNews has a great review of the day here. [...]