BOULDER -- It's called the Medusa Vascular Plug, and as one of the newest FDA-approved medical devices, it's just as intriguing as the name implies.

Produced by EndoShape, a biomedical startup based in Boulder, the plug tackles a common problem.

When a doctor needs to stop internal bleeding - say, hemorrhaging from the spleen after a car accident - a non-invasive procedure is preferred, but current technology isn't the friendliest. Standard metal-based plugs are bulky and rigid, which makes insertion tricky at best and impossible at worst.

The Medusa could give doctors another option. Thanks to a flexible polymer developed at the University of Colorado-Denver, there's no need for invasive surgery. The name says it all: Using video x-ray, doctors weave a small tube through the damaged vein or artery.

Once at the bifurcation (or split in the vein), the device releases dozens of tiny polymer tendrils to block the gap. There are few scars, no residual X-ray or MRI signatures and -- best of all for EndoShape -- no similar products on the market.

"It's a neat opportunity to go into procedures that are already done, so we aren't inventing any new medical procedures," says Jeff Castleberry, EndoShape's chief operating officer. "What we've done is just develop a much better product.

And the medical world has already taken notice. Shortly after earning FDA approval, EndoShape announced the plug would hit the market in mid-to-late-March. By the end of this month, Medusa could be saving lives.

"We're a little bit different," Castleberry says. "You look at lots of companies that have wonderful, creative ideas, but they're almost always using existing materials. With something like this, we were truly treading new ground."

For a company of just around a dozen employees and contractors, EndoShape boasts an impressive resume. Castleberry has nearly 30 years in the biomedical industry, including CardioOptics, a like-minded vascular plug developer also based in Boulder.

The management team's pedigree helped boost the work done by the company's founder, Robin Shandas, the current chair of bioengineering at the CU-Denver Anschutz Medical Campus.

In 2007, Shandas worked with shoestring grant funding to finally make a breakthrough with a shape-memory polymer. Over the next few years, he and a small group of grad students continued tweaking the technology.

Their work eventually attracted the attention of the National Science Foundation and the Colorado Office of Economic Development, which matched a few of the initial grants and helped propel EndoShape from the Denver campus to Boulder. 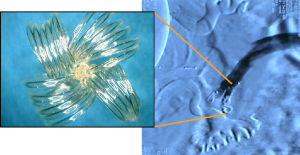 By 2011, EndoShape hit a milestone when it won roughly $1.5 million in capital funding from Volcano Capital in New York and High Country Ventures in Boulder. Those funds sped up research and development at the company's Boulder lab, along with beta-testing at several labs across the country.

"All the grant funding let us kind of nurture this idea and really give the proof of concept," Castleberry says. "Someone like Volcano Capital really had an interest in medical services - they believe it's a largely untapped market - and they really propelled us forward."

Since 2013, the FDA has reviewed thousands of applicants and approved fewer than 40. Each new product works just a bit better or acts just a bit differently than what came before, but Castleberry is confident the FDA nod is the boost EndoShape needed. The polymer attracted attention almost immediately.

"Without question, when you're establishing a viable business model, you really need those approvals," Castleberry says. "We've seen that doctors have an appetite to use our product and that was the next step to getting it out into the medical community."

For EndoShape, releasing the Medusa was just the first taste of the company's soon-to-be-expanded catalogue. Castleberry wants to see a full range of plugs in the next few years, ranging from large to small, which gives doctors options for a slew of internal issues.

The extended catalogue is also an important step for that pie-in-the-sky goal of all startups: long-term funding.

"We've proven the material and product have interest," Castleberry says. "There are a number of entities that want to get the product in their facilities, but when we look at valuation and making the company sellable, it makes sense to have a full catalogue.

"That can be a strategic partner that comes in during another funding round, or that could be more venture funding."