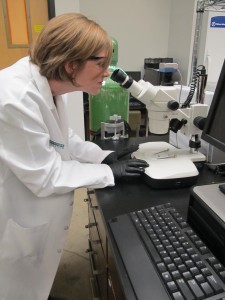 FORT COLLINS - Melissa Reynolds is confident her approach to developing revolutionary, anti-rejection coatings for medical devices is the right one.

And she's embarked on a long road to take her natural-based coatings to market and - with any luck - a high level of profitability.

"Other people have tried, but they're not as good as we are at developing new innovative technologies that have overcome the issues with other similar types of materials," said Reynolds, a Colorado State University chemistry assistant professor who founded her own company - Diazamed - in 2010.

A native of Washington and a member of the CSU faculty since 2009, Reynolds' research led her to develop a natural therapeutic agent that can be integrated onto the surfaces of cardiovascular device implants and make them less likely to be rejected by the body's natural defense mechanisms.

"When something is put into the body, the body's going to respond to it by rejecting the device, which creates complications that we need to devise a solution for," she said.

"Our technology helps the body get along with the device, and since it's a natural (coating), the body doesn't reject it."

Reynolds said she became involved with research into medical device coatings while still a grad student at the University of Michigan.

"I became interested in product development and answering some questions I was interested in," she said, adding that she knew that CSU would help her license her research and found a company based upon it.

With the help of CSU Ventures - the university's tech transfer arm - Diazamed was founded in January 2010. This past April, CSU's partnership with the Innovation Center of the Rockies led to Dan Storey, a medical coatings industry veteran, to take over as company CEO.

Storey's job is to tap his industry connections and find investors for the technology.

"From my perspective as a faculty member, you have to bring in experts to drive this product to commercialization and the business successful and sustainable," Reynolds said.

Storey agrees. "You can't have them be the researcher and run the company," he said. "I need her focused on bettering the technology while I get out and disseminate it into the community," he said.

"It solves problems that people have been trying to solve for a while," he said.

Storey said the economic downturn in 2008-2009 resulted in many big medical device companies downsizing or getting rid of their R&D departments.

But with the ongoing rebound in the economy, those companies are looking for products from small outside research-based companies to buy.

"They want an FDA-approved product and they're willing to spend millions to do it," he said.

Storey also noted that because the Obama administration's Affordable Care Act has "put downward pressure on prices" for services and medical devices, coming up with a coating that can be applied to a material less expensive than, say, titanium is an attractive proposition.

"New coatings are really making a resurgence in the medical device community," he said. "Coatings can really reduce the cost of the device."

Storey said the company has a two-pronged plan to get to commercialization of naturally coated medical devices. He said the first step is to find buyers for the coatings, and then to use those funds to take the coated devices through the expensive FDA approval process.

Finding investment for that second step is a focus for the company now. "Our next step is (venture capital) funding," said Storey. "We're really looking for money."

Storey said the end of the road is bright, but the company won't be able to get there without some investor help.

"As we go into this round of fundraising, (investors) want to know what the real potential is," he said. "If everything falls into place, we have the potential for $150 million to $180 million in this market."

Reynolds, a Boettcher Foundation Investigator at CSU, said the financial pot of gold at the end of the research road is fine, but there are other less tangible rewards to her work that drive her forward.

"I love what I do," she said. "You get to learn about new things and -if you get it right - you can help a lot of people. Best of all, you can train the next generation of researchers who will sustain the innovation pipeline."