LITTLETON -- In old Star Trek episodes, the doctor would run a handheld tricorder over someone's body and make a health pronouncement.

The tricorder was a multifunctional device used for sensor scanning, recording and analyzing data to help diagnose disease and collect bodily information about a patient.

That fictional object of the future is -- in current day -- becoming a reality, thanks to dBMEDx, a company offering a hand-held ultrasound scanner called the BBS Revolution that can be used for medical assessments.

The BBS is a user-friendly, mobile ultrasound scanner initially designed for bladder scans and can eventually transition into a wide range of diagnostic applications, says David Shine, dBMEDx CEO.

The BBS, which will be available about mid-2014, will offer real-time patient monitoring with a patented, non-invasive scanning technology. By combining the power and safety of ultrasound with image processing electronics and software, diagnostic measurements can be provided.

The compact unit's design is palm-sized, battery powered, inductively charged and completely wireless with an integrated Bluetooth radio for communication with a wide range of potential display platforms and mobile devices.

"The initial use will be to check the volume of urine in a patient's bladder," Shine said. "When you're in the hospital, you typically have to go to the bathroom before you can leave. If that doesn't happen, it may be that you need to drink more water or there might be a true medical problem. The real value with this is that you don't have to put a catheter in someone to find out."

Not only is that good news for the patient, hospitals also benefit. "They can avoid unnecessary catheterizations and that can also avoid infections. The current buzz phrase is catheter-associated-urinary-tract infections (CAUTI)," Shine said "Medicare is not paying for these infections if a patient acquires the infection during a hospital stay, so hospitals are very motivated not to have these infections occur."

There are other devices on the market that can take these measurements, but dBMEDx's BBS offering will be smaller, cordless and can be used with very little training or expertise. "That's the beauty of it," he adds.

"We've worked hard to make them extremely easy-to-use," Shine says. "We want technicians and nursing assistants to be able to use it. This is a sophisticated means of measurement that can be used by a wide range of people." 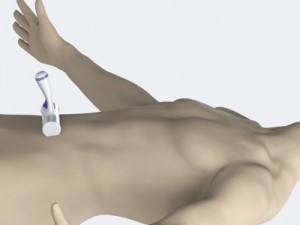 That range could eventually include patients themselves. "For example, with a spinal cord injury, a person in a wheelchair might not have the sensation of how full the bladder is and may have to catheterize themselves several times a day. So this would be a way to help those folks determine if the bladder is full.

"Nothing like that is currently available, but we think it's possible to eventually put our scanner in the hands of patients," he said. "Nothing precludes that from happening down the road. It's just like having CPAP machines making their way into the home."

"I use ultrasound every day," says Bill Quirk, M.D. attending physician at Porter and Littleton Adventist Hospitals in Denver and dBMEDx's chief medical officer. "In my world, ultrasound has always been operator-dependent and only qualified doctors and technicians could use it."

That's not the case with dBMEDx scanners, which can be used by a range of technicians and emergency responders. Nursing assistants at nursing homes could also quickly learn to use it.

"Ease of use is the key," Quirk says. "We want it to be operator-independent. You don't have to have M.D. or Ph.D. after your name to use it. It's very easy to use and, in fact, if you and I were together for 5 minutes, you'd be as good at using it as I am. One thing that makes it so easy is it's cordless and portable." 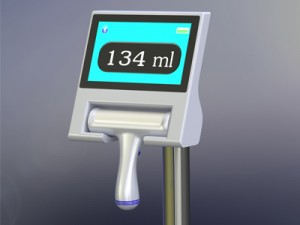 dBMEDx was founded in 2010 with the mission to put the power of diagnostic ultrasound into the hands of every medical professional. The company has locations in Denver (Littleton) and Seattle.  Principals of the company include Shine, Quirk, and Bill Barnard, creator of the original application, who serves as the Seattle-based CTO while Quirk functions as the company's chief medical officer.

A second product, the StatCVP, is also in development. "It can be used to estimate the central venous pressure (CVP)," Shine said. "That measurement is very important today when someone's in the hospital and sepsis is suspected."

This, too, is a noninvasive device, he says. "You can do it without sticking a catheter in someone's neck. The hardware is similar to the BBS, but the software will be different."

Adds Quirk: "The StatCVP use in a possible sepsis situation would give us an idea as to the intravascular volume and could help us guide treatment noninvasively: Should I give more IV fluids or blood products or put in a central line? Hopefully, we'll avoid central lines in the management of sepsis."

As an example application, Quirk says, "We could foresee this being used on the sideline of a football game. A young person hits his head and we could tell if they need to go to the emergency room for immediate medical attention."

dBMEDx is drawing attention in many areas. In December, the Colorado Office of Economic Development and International Trade (OEDIT) awarded $249,000 to the company as part of its Advanced Industries Accelerator Grant Program. Grants were given for both Proof-of-Concept and Early Stage Capital and Retention Grants to support key industries.

"As part of this award, we are focusing on our work in Colorado," Shine said "We end up working with a lot of third parties. It not only helps us grow our company, it feeds a lot of service providers and consultants, so our impact continues to grow in different directions."