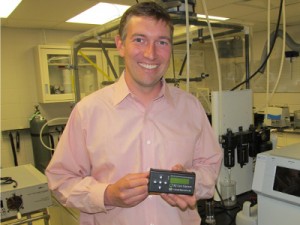 Volckens, an associate professor in the Department of Environmental and Radiological Health Sciences at Colorado State University, has been researching nanoparticles for years.

"Nanotechnology is the art and science of manipulating molecules or structures on the scale starting at one-billionth of a meter," said Volckens. "On the low end, it's a couple molecules stuck together."

Over the past decade or so, more and more interest has been focused on nanoparticles and nanotechnology, as everything in today's digital world has gotten smaller and smaller.

Volckens notes that - because of their tiny structure -- nanoparticles often behave in new and unexpected ways, such as adding extra strength to everyday items.

"When you start to put things together on that scale, the materials tend to behave differently than they would in bulk," he said. 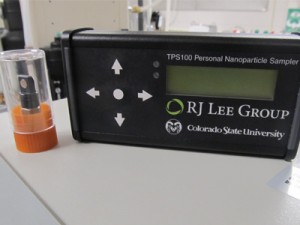 For example, tensile strength can be improved by adding things like carbon nanotubes to materials, Volckens said. Such nanomaterials are beginning to show up everywhere - including in tennis rackets, bike frames, car bodies, tires, windshields - as just a few examples.

Nanoparticles are also being used in other novel ways, including in the biomedical sector.

"They can be a coating that allows a pill to be absorbed more slowly or more rapidly," Volckens said. It's also showing up in foods, as additives for flavoring and in shampoos and cosmetics.

Scientific interest in nanoparticles started taking off in the 1990s, Volckens said, and the U.S. government began investing billions in nanotechnology after the adoption of the National Nanotechnology Initiative of 2000.

But there is also concern about some aspects of nanoparticles. Volckens notes that the particles are so small that they can easily enter into the human body and pass through cells.

"There is some fear around nanotechnology indicating that, just because we're doing things differently, there could be unintended consequences," he said.

"If those particles get into our bodies unintentionally, is that a good or a bad thing?"

Since 2007, Volckens has been working to develop a nanoparticle detection device to find, identify and measure nanoparticles. The device is now a working prototype in its fifth iteration, he said.

"The technology collects nanoparticles and allows us to do high-level analysis of what's in the air," he said. "There's thousands of nanoparticles that exist in the atmosphere, and we need to find a way to differentiate them."

Volckens said the device - about the size of an electronic  guitar tuner - collects nanoparticles that can be placed on an electron microscope and examined for size, shape and chemical makeup.

"Knowing these three things, we can do a pretty good job telling where these nanoparticles came from."

Volckens said he believes the initial market for the device will be in nanotechnology manufacturing centers, where nanoparticles are incorporated into commercial products.

"This device is essentially a platform for assessing exposure and risk," he said. "Now we have a way to identify what you breathed in."

Volckens said potential buyers also include "researchers of all forms working with nanoparticles, people wanting to protect their workers and for those interested in studying nanoparticles."

"There's hundreds of new nanoparticles being invented every day. It's becoming increasingly difficult to keep up with the explosion of this technology sector."

Volckens said the technology he's developed may be just a step along the way to more specifically identifying nanoparticles and assessing their risk to people.

"How many does it take to maybe be dangerous," he said. "That's where this research will lead."