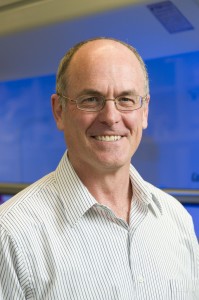 The award, conferred by the Office of the Vice President for Research, recognizes faculty whose scholarship has had a major impact nationally and/or internationally, CSU said.

Belisle's research focuses on the physiology of the tuberculosis bacterium and the immune system's response and uses that information to find new ways to treat, diagnose and prevent the disease.

"John's career epitomizes the cutting-edge, impactful work done by CSU faculty," said Bill Farland, VP for research at CSU. "He is a world-class researcher, well-respected scholar and a strong ambassador for the great work we do at CSU."

Belisle is currently heading up a Bill and Melinda Gates Foundation grant top identify molecules in urine, saliva or serum that signal a TB infection. He is also working on Lyme disease with the Centers for Disease Control and Prevention and several leprosy studies.

Belisle received his doctoral degree from CSU in 1992, completed a Post Doctoral Fellowship at the University of Texas Southwestern Medical Center and became a CSU faculty member in 1995.