LITTLETON -- When amputees asked Royce Heck and Clint Accinni why today's artificial sockets were no better than two decades ago, the Colorado-based prosthetists listened - and began wondering the same thing.

It's a reasonable enough question. Over the past decade, nearly every branch of the medical industry has jumped light years ahead thanks to smartphones, 3D printers and mobile everything.

Technology has paved the way for dozens of emerging tools, from polymer-based heart valves by Boulder's EndoShape to those funky little fitness bracelets by Jawbone, Samsung and Garmin. 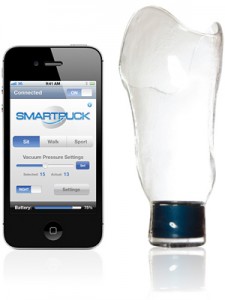 Yet Heck and Accinni saw the prosthetics field falling behind the curve. Like most medical industries, the vast majority of breakthroughs have been limited to hardware: prosthetic limbs went through minor upgrades - think new legs or arms featuring the lightest, strongest materials on the market - while the rest of the system stayed largely unchanged.

"Prosthetics are like a tinker-toy set," says Heck, co-founder of Littleton's 5280 Prosthetics with Accinni. "Manufacturers make feet and knees and all these cool things you see on the news, but the most important part of a prosthesis is the socket, the piece that actually fits the limb."

It's not as sexy as a carbon-fiber limb, but like muscles and arteries and tendons, the puck-sized system helps the attractive outer pieces work at their peak.

"No one was thinking about how this all fit together," Heck says. "Carbon graphite is a great material for snowboards or skis or baseball bats, but it's very rigid when it's on your body. You want something that can move, something that can be more dynamic."

When pared down to tech speak, the SmartPuck system is more or less a "smart" socket: It talks to the amputee through an iOS app, sending live updates from deep inside the patient's prosthetic socket.

And the app truly is smart, with everything from presets for walking and running to info on socket pressure from 5280's trademark vacuum system.

"The patient is the person wearing the prosthesis, so we want to do all we can to give them as much choice as we can," Accinni says. "It's kind of like the Sleep Number bed: People can find the right vacuum setting and they can change it at will. It makes problem solving easier."

For Heck and Accinni, problem solving is part and parcel of 5280 Prosthetics. They're self-proclaimed "limb guys," as Heck says, and shortly before founding the company in early 2010, the two knew their industry was rife with problems.

It began with the patient complaints. On average, Heck says below-knee prosthesis systems cost around $15,000 between limbs, sockets and the remaining materials. The upfront cost is steep, but for most patients, particularly new amputees, relearning to walk and move freely again is the largest hurdle.

Yet much like running shoes, if the prosthesis doesn't fit, the relearning process is daunting.

Through their clinical practice, Heck and Accinni saw these problems upfront. They serve a huge swath of the amputee population - retired Marines, lifelong diabetes patients, victims of auto accidents - and without exception, every client simply wants to find a new normal.

SmartPuck is a step closer to normal. Along with user-guided apps, the system is known for its intelligent vacuum technology, which gives amputees the kind of control only their doctors had before.

For the past century, doctors have relied on rudimentary vacuum seals to attach prostheses to limbs, but throughout the day, those sockets tend to jostle around. To use the shoe metaphor again, there was no way for the patient to "re-tie" their prosthesis - they simply had to keep walking or running or biking on a loose limb.

With SmartPuck, patients have a technological "shoelace": They can adjust the vacuum seal at will, at any time, from any place. Packed inside the system are gyrometers, Bluetooth transmitters and other sensors - "almost like the motor in your car," Heck says - that fit easily inside a pliable socket made of clear thermoplastic.

In the past four years, the founders have riffed off the original system to release the AirPuck, a slimmed-down "economy" version for third-world countries, and the VaporPuck, a military-grade vacuum system with no bells and whistles.

"The most surprising thing we've learned from this process is that when we give patients control of their prosthesis, it's a game changer," Accinni says. "It changes their lives. No longer is the prosthetist changing their pressure or being the only one with control over how the prosthesis fits."

At the moment, all of 5280's products are made for below-knee amputations - easily the most common for most prosthesis patients. The first quarter of 2015 will see the company's first above-knee system, dubbed SmartPuck Zero. It boasts the same features and capabilities as its below-knee sibling, but the system is sized to fit in artificial arm sockets.

From there, Heck and Accinni want to tap into the nearly unlimited promise of the SmartPuck apps. The company is working with a third-party developer to build new apps beyond the basic control center. Heck is most excited to "gameify" the technology, with activity trackers and training routines for walking or biking.

Those apps can even help patients cut slash medical bills. In the U.S., clients need to prove they stay active to qualify for high-end, outdoor-friendly prostheses. The newest SmartPuck apps will track that activity and more.

"The more active you can keep a person, the more you mitigate the healthcare costs," Heck says. "You might have a $25,000 prosthesis, but by getting out and being active and doing things, it reduces the chances of other health issues. The overall cost to the health system goes down."

After all, Heck and Accinni only wanted to make life a bit easier on their patients.

"Changing how we think about this is a one-prosthetist-at-a-time thing," Heck says. "But it's really the patients who are driving this. Once they feel how the socket works, they start demanding it."