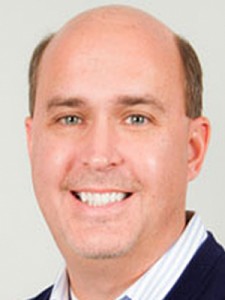 John Oechsle is president and CEO of Denver-based Swiftpage, a leading provider of software services that help businesses grow.

John joined Swiftpage in July 2012 and has a 25-year history of building highly profitable and sustainable revenue growth for emerging companies and established global leaders.

Prior to joining Swiftpage, John served as executive VP of strategy and product at DigitalGlobe, a satellite Earth imagery company.

Before that, he served as senior VP of technology and content and CIO for IHS, Inc.

John has a BA in computer science from Rutgers University and is a graduate of the Tuck Executive Program from the Amos Tuck School of Business at Dartmouth College.

Q: You have a distinguished career of executive leadership with some big companies, including DigitalGlobe, IHS and a subsidiary of Johnson & Johnson.  What was it that attracted you to Swiftpage?

A:  I'd actually had quite a long history with Swiftpage even before I officially joined the company because the founder Bob Ogdon and I have known each other for many years. I originally started early on with the company as an advisor to help provide guidance on strategic decisions. I was asked to join the board in 2008 or 2009 and was deeply involved in that capacity.  When the opportunity arose for me to take on a larger role, it wasn't even a question of what attracted me, it was, "Why wouldn't I do this? This is fantastic!"  The opportunity to be a part of an excellent company with great people and technology was what really attracted me.  I suppose it is more fitting to flip it around the other way and say that I am humbled that I was even asked to assume this position, because it's such a fantastic organization.

Q: Swiftpage seems to be growing quickly in the two-plus years you've served as CEO, attracting investment and expanding into new markets as it did earlier this month with an agreement with Hong Kong-based Messe Bridge Capital to be a product reseller in the Chinese market. How do you explain Swiftpage's rapidly enlarging profile?

A: Sometimes in business it's all about timing and when you look back over the past couple of years, there've been things that have been happening in the industry and markets that made the timing just right for us to get involved.  In the beginning with Swiftpage, we were working in what is called a "white labeling"  business model, where we had relationships with many companies that would take our technology and embedded it into their own solutions.  One of these relationships was with Sage, who had integrated our capabilities into Act! and Saleslogix.  When those two products became available for acquisition in 2013, it was the right timing for us, as it would allow us to fully merge our emarketing capabilities and their leading-edge contact and business management capabilities.  Figuring out how to do all of that--attracting the right capital and getting the capital structure right--was challenging, but a lot of fun. It was an interesting time where Sage, who owned these two properties, said, "We've taken them as far as we can." We were in the right position where we were able to say we could take them farther and in a totally different direction.

When we made the acquisition, it enabled us to grow extremely rapidly due to the fact that we were purchasing two companies that were triple the size of what we were.  This opened up an enormous amount of opportunity in different global markets.  We rapidly expanded into Europe and acquired a lot of relationships around the world through the acquisition including the relationship with Messe Bridge in Hong Kong and China.  I think it boils down to how you explain it.  We were in the right place at the right time, but we had the courage to take the action. I think that is the one thing that's different from other companies.  They see that the timing is right and the opportunity is there, but they don't step up and have the courage to seize the opportunity--we did.

Q: Swiftpage is putting a major focus on its new Act! Cloud management service. What is it about Act! that is innovative and exciting?

A: Act! is an interesting product. It's been around for more than 25 years now and it's been the number one contact manager for the duration of its existence.  It has a phenomenal brand.  Over the years, we have continuously honed the technology and added an enormous amount of functionality. But more importantly, we've made the effort to completely understand what micro and small businesses need in order to convert and retain customers.

Over eight million companies have used Act! since it was introduced almost three decades ago.  Now the innovation comes from taking all of that, and taking it to the next generation.  It has to move where all of the other technology is going. They are all moving to software-as-a-service (SaaS) and cloud-based models.  Everything is light, can be run on any device, is completely mobile, etc.  So that's really what Act! Cloud is all about.  All of those years of experience and customers and saying, "How do we now take that to a new technology platform that is going to be progressive and innovative?"  That's what we've done with Act! Cloud.

We released Act! Cloud on Sept. 18 and we're getting great reviews. We have 30 to 50 people signing up daily right now and it's really telling us this is the next generation of Act!.  This platform can run on just about any device as well as integrate back into desktops, so it's extremely appealing to the solo, 1-5 or 5-25 employee micro and small businesses that we're targeting.

We're just getting started and we are taking all of that knowledge and moving it into an intuitive platform that will actually give users proactive recommendations on what to do next in order to convert and retain more customers. As a micro or small business owner, you don't have to go in and have a PHD in computer science to run your software. You go into an environment where the software says, "Hey, today you should do this based on all of the interactions that you've had in the past." There's a ton of innovation going on. I'd say the next generation of Act! has just gotten started.

Q: You are a strong supporter and active contributor to the Colorado Technology Association, and you received Technology Executive of the Year awards from CTA in 2006 and 2009 when you were with DigitalGlobe. After you moved to Swiftpage, the company was nominated for CTA APEX awards in 2013 and again this year. Why are you such a strong advocate for CTA?

A: Both Bob and I are extremely supportive of a couple things in the state of Colorado.  The first is the entire technology industry and the second is the startup community within it.  We see Colorado as a phenomenal place not only to do business, but just a phenomenal place to live and raise your family.  What we like to look at is how we can create an ecosystem inside of the state that is very much like Silicon Valley, Seattle, Austin, or the Boston area.  We think we have so much to offer and we have great universities that have fantastic students graduating with engineering and computer science degrees.

We have a rapidly growing number of small companies because we have a great startup networking and support community.  We also have great enterprise organizations.  Small companies need large companies and large companies need small companies and they all need resources coming out of the universities.  Then, you need the government, the state, and the local government to pull it all together.  The last thing you need in the ecosystem is capital. You need venture capital, angel capital, private equity, etc.  If you bring the entire ecosystem together you create an environment that thrives and grows.

Q: You are a big supporter of local youth tech education programs, including OpenWorld Learning (OWL) and KidsTek. Why do you feel that is important?

A: Youth and technology and STEM is something I am personally very involved in along with Bob and the company as a whole. We really believe that in order for not only the state, the country and the economy to continue to grow, we have to get focused on science, technology, engineering and math.  We have to make sure that every child has the opportunity to get involved in those fields.  The challenge right now is that, depending on where you go to school and what socioeconomic position you're in, you may not have access to the right resources. I think that's an issue we need to focus on and work to bridge that gap.

This is why we're so involved with youth tech programs like OWL and KidsTek. They go into schools that don't have the ability to provide this type of thing for their students.  We were at an event recently that was celebrating OWL and you look at both of these programs and the schools they go into and some of these students don't even graduate unless they have some help.  Those organizations provide an opportunity for them to stay in school and get excited about science, engineering and math, so that they can study these things in college and enter these fields professionally.  If you do that, it provides an enormous amount of resources that we can continue to tap into and support the community.  It's about making sure that everyone has access to technology and everyone has access to an opportunity to grow, get an education and find a job.