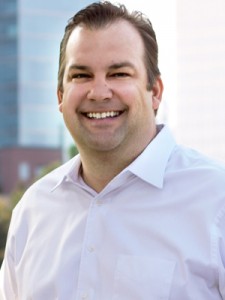 Erik Mitisek has been leading the Colorado Technology Association (CTA) for a year and helping build the startup and technology community since 1999. He previously served as co-founder of Next Great Place Inc., a Denver-based online luxury travel company.

Over the last several years, Erik has been deeply involved in helping to raise Colorado's innovation profile. His LinkedIn summary says he is "on a mission to make Colorado the most recognized innovation and technology center between the coasts."

Since November 2011, he has served as co-chair of Startup Colorado, a regional initiative to enhance the entrepreneurial ecosystem across the Colorado Front Range.

He has also served as chair of Built In Colorado, an online community of innovators, makers, founders and creatives building the digital companies of tomorrow.

Since March 2013, Erik has served as a board member for the Colorado Innovation Network (COIN), a privately funded organization under the Hickenlooper administration that seeks to promote and encourage innovation in the state.

He also is a co-founder and organizer of the first Denver Startup Week in 2012, which will celebrate its third Startup Week Sept. 15-20.

Q: Tell us about the impetus for Denver Startup Week and how that came together in 2012. You had just helped launch the Startup Colorado, Denver Chapter earlier that year.

A: Denver Startup Week started like many great startup community organizations, led by a group of passionate entrepreneurs.  Startup Colorado had started earlier that year and one of the core objectives was to connect the Front Range entrepreneurial communities (Boulder, Denver, Fort Collins and Colorado Springs). One of the first ideas to accomplish that was a celebration of everything entrepreneurial in each city - and Startup Colorado was instrumental. Boulder Startup week had just celebrated its second year and over beers at Wynkoop Brewery in the spring of 2012, Denver Startup Week was born.

The initial idea for Denver Startup Week was an event that was truly reflective of the vibrant startup community in Denver, with programming and events led by the community, to benefit the future of the Denver. It was also important to be hyper-inclusive of all entrepreneurs, so all events needed to be free.

Realizing in a city the size of Denver it would be hard to build something of scale without partners, I met with Tami Door and the Downtown Denver Partnership and discovered they had also identified helping build the startup community as an important initiative as well. We were flying in parallel paths and combined forces to produce the first event.

Quickly, in May of 2012 a partnership was born and, with the volunteer team in place, the first Denver Startup Week was off and running.

In the first year, nine committed community volunteers, tens of sponsors and supporters and 50+ event organizers put on the first event start-to-finish in 100 days. That year we had over 3,500 attendees and 70 events. It was the best of the startup community -- fast, collaborative, gritty and fun. In addition, we helped launch both Galvanize and Built In Colorado, who announced their plans to open in Denver during that week as well.

In 2014, we are excited that the energy has spread and will celebrate the first year with Startup Weeks in all four major Front Range cities - all celebrating entrepreneurship in Colorado.

The community-led nature of the event has made it become the success it is, and I am so thankful for all the community leaders who program, volunteer and attend to make this event one-of-a-kind AWESOME! Thanks to them, this event should continue to grow. Not just in Colorado, but globally.

Q: What role did CTA play in getting DSW up and running, and how has that role evolved over the last two years?

A: CTA has been critical in the development of Denver Startup Week. Before I assumed my role, Steve Foster, the then-CEO, quickly recognized the opportunity and got CTA involved from inception. Wendy Nkomo, our COO, led the Business Track in 2012 and Maggie Reber-Wynn led large events in 2013. Both as volunteers and sponsors, CTA has helped lead the success of Denver Startup Week with its network of technology professionals across the state.

Startup and innovation communities are about people and networks and are successful with great partnerships and support.  CTA is a strong supporter of both innovation and early-stage growth in Colorado, and Denver Startup Week is a great platform to engage with both communities.

Q: Why is Denver Startup Week growing significantly every year and what do you think that says about the depth of the entrepreneurial community in the Denver area?

A: Denver -- as a startup hub -- is growing rapidly! Denver Startup Week is a reflection of that growth. When you look at the number of new startups who have attracted capital in Denver from our Built In Colorado reports , we see a steady growth from 2012.

There are a lot of factors driving this, but thanks to great co-working and innovation spaces (Galvanize, Shift, INDUSTRY, etc.), more millennials coming to Denver than any other city in the U.S., and large, late-stage companies continuing to expand in Denver (Rally Software, SendGrid, HealthGrades, etc.), the startup scene in Denver is on fire.

Back to the people, the real catalyst in Denver is the entrepreneurs leading the community organizations like Denver NewTech, 1 Million Cups, Startup Grind, Built In Colorado, Startup Weekend, Denver Founders, StartupDenver, Women Who Startup, and many, many, many more. In the last three years, we have seen tens of new organizations focused on helping entrepreneurs navigate the world of "startupland" come to life to address topics and growing areas of interest in the community. These are critical to community growth and reflective of Denver as a startup hub of the future.

Q: You were involved in helping launch Built In Colorado in 2012, actually before you began your CEO role at CTA. What is your assessment of how that organization has evolved over the last nearly two years?

A: Built In Colorado has grown from zero to over 5,000 members in a little under two years. This project was again focused on the entrepreneurial community and being a platform for community members to engage, share news and learn about community companies and activities.

Initially, we were exploring developing a Colorado-only site to do mostly all of what Built In does today, but the idea of volunteers leading the effort was daunting. In the search for a great platform to unite the community, we came across Built In Chicago, which had really been able to engage the Chicago community.

Instead of build, we decided to partner and BuiltIn Colorado was launched on the Friday of the first Denver Startup Week with about 100 digital leaders in Denver supporting the effort. Since then, we have developed a great Advisory Board and Community Board supporting the effort and Elyse Kent leads the operations for the site.

We have seen great growth of the site and job board and Built In Colorado has become a core resource for startups in the community. We have a long way to go, but we're off to a great start and the more the community engages in the site, the better it becomes!

Q: Since you became CEO, how has Colorado Technology Association helped stimulate innovation across the state through its emphasis on connecting the state's technology community?

A: CTA is the largest network of professionals and companies fueling the technology economy in Colorado. With a strategic focus on community, economic development, public policy/advocacy and workforce development/education, the organization and Board of Directors are involved in many initiatives helping drive the state's technology community.

In addition to our support of Denver Startup Week, we sit on the board of the Colorado Innovation Network (COIN) and Office of Information Technology Economic Development Council to help drive economic development through innovation.

This summer, we launched DigitalColorado - The Colorado Technology News hub for all things technology across the state. This online portal makes it easy to stay on top of all the innovation and technology news in one, easy-to-consume location.

Most importantly, this month we launched the Colorado Technology Foundation, focused on fueling STEM education and programs to bring more innovators into our workforce in Colorado. Our foundation is focused on convening the community around STEM programs, connecting the technology industry to our schools and building programs that will impact our future technology workforce in Colorado. Innovation is dependent on talent, and this is our commitment to help produce some of the best technologists in the world -- right here in Colorado.