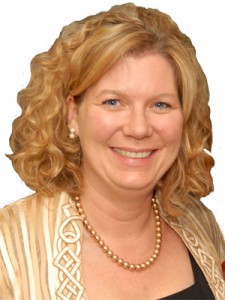 A second NoCo Mini Maker Faire in Loveland at the Rocky Mountain Center for Innovation and Technology is planned for Oct. 4-5.

Elizabeth currently serves as development administrator for cultural services for the City of Loveland, which includes the Rialto Theatre, outdoor art projects and the Loveland Museum.

She has more than 20 years of experience in the for-profit and nonprofit sectors. She served as founder and president of The Insight Speaker Series in Denver that featured celebrity speakers such as Archbishop Desmond Tutu, journalist Bob Woodward and Chilean best-selling author Isabel Allende.

Elizabeth has a BA in International Relations from Scripps College.

Q: You have traveled an interesting career path to arrive where you are now as a city administrator and organizer of the biggest Maker Faires in Colorado. How do you view that path and the experiences that have led you to where you are today?

A:  The shootings at Columbine were actually a big influence in my career path.  I was a global marketing director for telecommunications and worked all over the world, when my family found ourselves sheltering teens in our house in Littleton.  I decided to go into nonprofit work and do things to help the world.  At the same time, I also have an insatiable curiosity about everything.  So I sit on the Board of CO-LABS, which is an organization working with the 24 federal science labs in Colorado as well as working in the arts field and working with economic development clients - very opposite worlds. This is why the Maker Faire has been so appealing to me. It brings together all these disparate elements of arts and science and innovation and entrepreneurship with the causes I care about such as education, sustainability and economic justice.

Q: You organized the first NoCo Mini Maker Faire in 2013 that drew thousands of people to view and interact with hundreds of displays and was considered an unqualified success. Were you nervous about organizing something like that almost out of thin air?

A:  Well, at first I wasn't very nervous because it was a first-time effort and none of us had big expectations. The Maker Faire people told me that with less than 6 months to plan the event I should expect something small with 20-30 makers and maybe a 600-700 people. I've done that before. But when the flood came and our makers started cancelling and we had only sold 200 tickets and things had grown to the point where I had to bring in over a thousand people just to not lose my shirt...then I started getting pretty nervous. My team suggested that we delay the first NoCo Faire as many others were moving events after the flood, but I had a good feeling about it and we moved ahead to great success. When I looked out the window of the Faire and saw a line of people waiting to buy tickets, all my worries evaporated and the rest of the day was like Christmas and my birthday all rolled into one!

Q: What first inspired you to get involved in Mini Maker Faires and the Maker Movement? Are you a tinkerer yourself?

A: Gen Ponce-Pore of CSU! Gen and Kathay Rennels and I were having cups of tea at the end of March last year (you see, 3 cups of tea can be a powerful thing!) and Gen said, "What this town needs is a Maker Faire." I'd never heard of such a thing, had never heard of the maker movement. But the minute I did it fired my imagination. Here is something that I think of as Serious Fun - it's a lot of fun and at the same time it has a tremendous impact on some very important topics. We nurture people building a better world. This is how I think of it: The maker community crosses boundaries of science and art, young and old, craftsmanship and technology, coming together to create the innovation economy. The things we make define us as a society and build our future.  The people who invent, create, and make have the power to change the world.

I have never been a tinkerer myself, but have always admired those who can create things and so I make the place for them to show off what they do. That's what I can make.

Q: In the wake of the NoCo and Denver Mini Maker Faires, a number of related maker groups have sprung up in Loveland (Loveland CreatorSpace) and Fort Collins (Northern Colorado Makerspace). Is it gratifying to see these groups rise up, and what do you think it says about the creativity and innovation lying just below the surface of our region?

A:  I think the success of the NoCo Maker Faires is less a reflection of my capabilities and more a reflection of exactly what you've just pointed out - all the creativity and innovation is here, just waiting to be discovered, just waiting to have an outlet. All these amazing tinkerers have just been waiting for a way to express themselves, for tools to support their creativity and for a community that shares knowledge and ideas. The new technologies such as arduinos and 3D printing have put into every person's grasp the capacity to bring to life what they see in their imagination - without the need for their ideas to first be vetted by a corporate purchaser or an institution that controls the tools and funds for production. And you add to that mix traditional crafting skills and something beautiful happens. I see the fruits of this every week. My husband is an inventor and he thinks of an idea, designs parts, runs down to the Loveland Creator Space to get them printed, and the next day is testing them out in our garage. Because of last year's Maker Faire, my husband mentors a 12-year-old kid and on Sundays they'll be giggling in the living room while building a wind tunnel. On a larger societal scale, we are seeing new inventions coming into the market all the time from new prosthetics designs to new energy devices. And it's just as gratifying at the faire to see someone learning to spin or weave as it is to see the techie things.  At last we've made it easier for people to make things for themselves, to find and build solutions.

Q: Where do you see the do-it-yourself (DIY) and maker movements in Colorado and across the nation in the next five years?

A:  Funnily enough, I see a parallel to the brewing industry. One of my many career paths was that I used to be Vice President of the Association of Brewers. The brewing industry was dominated by three big brewers, and homebrewers were a small group of people who wanted beer to taste better, who expressed their creativity in brewing small batches. As craft brewing exploded, industry people kept saying, "Have we hit saturation in the number of pub breweries?" Twenty years ago they thought they were nearing the end of the growth and  we still haven't seen it happen. In much the same way, I think the maker movement is just beginning. There is room in every classroom, every town, every library, every corporation to incorporate innovation and creativity through making things. The Maker Faires around the world illustrate this. The original Maker Faire in California is at 120,000 visitors in a weekend. New York is over 75,000 people now. Detroit, Kansas City and Atlanta are all huge. And maker spaces are popping up like Starbucks! I think our NoCo not-so-mini Maker Faire can help catalyze this energy, bring together collaborations that continue throughout the year, and inspire people to learn new ways of making.

This year, we have some amazing collaborations that sprang out of last year's event. The Colorado Education Initiative is coming up and hosting a screening of the new Maker documentary for educators the week before. The City of Loveland is putting on an innovation symposium in the days leading up to the faire: Accelerate Colorado. I am guest lecturing on Making an Event at CSU's LEAP program and their class is building and presenting the Nerdy Derby as a class project -- and we have another really exciting project planned for the spring...more to come! So as you noted earlier, there is a wellspring of creativity and innovation in this area and we have a wealth of great people and organizations working together to bring their ideas to life.