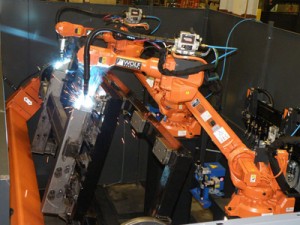 FORT COLLINS -- You'd expect the team at Wolf Robotics to be obsessed with robots as the centerpiece of the robotic welding equipment the company manufactures.

But what might be a bit of a surprise is how focused the company is on the human side of their business -- along with the businesses of their clients -- and of the economy as a whole.

For Wolf's Engineering Manager Lance Guymon, the importance of people and relationships as the source of the company's innovation can't be over emphasized.

"There are smart, driven people in Northern Colorado, and our connections with local schools, including Colorado State, Wyoming, CU, Mines and Front Range help us bring good, bright folks in through our internship program," he said. "That's the single smartest thing we've done here over the past 10 years."

In 2003, the 110,000-square-foot facility on Harmony Road that Wolf calls home was a division of Swedish robot maker ABB. ABB planned to consolidate its local facility with one in the Detroit suburbs to focus on auto industry work.

Many on staff wanted to stay in Colorado and focus on other applications. The efforts of locals who wanted to continue calling Fort Collins home led to the purchase of the division from ABB by Rimrock. The Columbus, OH supplier of automation products and integration services expanded its offering of foundry and palletizing expertise by adding Wolf's welding and cutting to its scope of services.

Today, Wolf employs 130. The company designs and builds its robotic welding systems around a variety of robots from Sweden's ABB and Japan's FANUC. Out of the gate in 2003, management carefully focused on leaders in key industries - including construction, mining, off road, oil-and-gas, agriculture and general fabrication - as prospects.

With a strategy of developing new technologies and products to help targeted customers improve their operations, Wolf focused on custom-engineered cells with a specialty in handling massive equipment. Those unfamiliar with welding may not understand what that means, but long-time employee Chuck Boyer notes that a key to their systems is the need to keep the work area - the "molten weld puddle" - level. 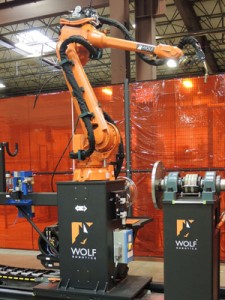 That means creating a system that coordinates lifting and maneuvering parts that weight tons in three dimensions -- and coordinating the movement of a positioner that handles that part of the job with one - or as many as four robots that execute the necessary cutting or welding operations at the same time.

More than 20 ways to move

Systems combine robots with five axes of movement, positioners that rotate parts, track systems that robots travel along, and towers that raise, lower and rotate, as well. The result is an apparatus that features more than 20 axes of movement.

The company is currently building a system that features the largest positioner it has ever created. It will handle a part that weighs 100,000 kg - 220,000 pounds, or 100 tons. The part is so massive it requires preheating with a torch to ready it for welding operations.

When Wolf Robotics began in 2003, Guymon and Boyer note that it was common to offshore manufacturing to take advantage of lower labor costs overseas. Now, they say, much of that work is coming back to the U.S., driven by a variety of factors.

And the type of automation Wolf does is helping to bring it back.

Re-shoring, he notes - and cites as examples 5,000 jobs one customer is moving from Japan to Georgia and hundreds of jobs moving from Mexico to Dubuque, IA - takes advantage of those predictable energy costs. It also eliminates transportation costs and delays, along with inventory capital costs.

"Getting a particular part from Mexico took weeks," said Guymon. "Now, that part can be made in Dubuque in a few days using automation. We don't have 300 domestic jobs for manual welders within that organization like there once were. But there are 75 high-paying technical positions, many of them there to manage systems from Wolf Robotics."

Boyer, who has done nearly every job on site during his decades-long stint at the company -- including pre-ABB employment with Heath and ESAB from the late '60s to the early '90s -- notes that welding is a dirty, difficult job. As the baby boomer welders retire, the younger generation does not want to weld.

That shortage of skilled tradesmen, combined with automation, presents a great opportunity. Wolf is working to take advantage of that opportunity by recruiting and training technicians and engineers to manage the robots, while the robots do the dirty work.

Here, Guymon's passion for the people side of the business -- and the larger statewide and domestic economic picture -- is clear.

"The median income in Colorado has decreased," he said. "The U.S. middle class has suffered. You may remember Ross Perot preaching about the evils of NAFTA and referencing a 'giant sucking sound.' With automation, manufacturing is no longer a dirty word, and we are bringing jobs home. We're helping to rebuild the American economy, rebuild people's income, and rebuild the middle class - by building machines, not by shuffling Wall Street paper.

"Wolf Robotics is here as a force to enable this," he adds. "We're taking on large, automated projects that they say can't be done and we're doing them, thanks to the creative, innovative people we have here."

"I think our mission is noble," adds Doug Rhoda, Wolf's CEO and president. "We're saving American manufacturing. Our customers include some of the best blue chip companies in the country, and we are helping make them more competitive."