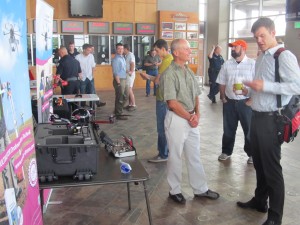 LOVELAND - Unmanned drone aircraft are promising to radically change the future in many ways, and one major avenue of that change will likely be in the field of public safety.

On Thursday, nearly 100 law enforcement, fire and emergency service workers learned about drone benefits and challenges on the near horizon during a public safety symposium on small unmanned aircraft and robotics held in the Budweiser Events Center at Larimer County's Ranch fairgrounds complex.

The free half-day symposium, hosted by the City of Loveland, Unmanned Experts and Loveland-based RoadNarrows Robotics, drew public safety personnel from up and down the Northern Front Range.

The symposium was led by Unmanned Experts, a UK-based, global organization offering training, program management and consultancy on drone aircraft.

Unmanned Experts secured a contract with the U.S. National Institute of Justice in January to provide UAV information outreach to public safety personnel in anticipation of that sector's increasing use of drones in the years ahead. 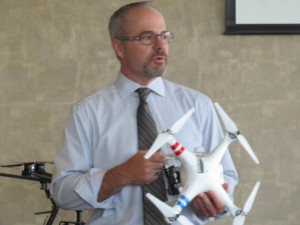 Dave Prall, a former Nevada law enforcement officer and UE's law enforcement aviation manager, said public safety agencies can apply to the Federal Aviation Administration to use drones in their operations by completing a Certificate of Authorization (COA).

Prall said he could provide help to agencies in applying for the COA, which is strictly monitored by the FAA.

"The public is very concerned about misuse of this technology by the government," he said.

Prall said the FAA is finalizing its regulations for the non-commercial use of drones and those regulations are expected to be released in 2016.

Meanwhile, public safety agencies are pondering in what situations the drones might be used and how to fund them.

Jurkofsky noted that the leading cause of death for police officers is being hit by a vehicle during a crash scene investigation. He said drones offer the opportunity to take photos and videos of an accident scene quickly, minimizing the time officers are exposed to possible injury.

"We want to capture all of the evidence and get out of there as fast as we can," he said.

Jurkofsky said most law enforcement agencies now use a fire truck ladder to get overhead photos of an accident site, which limits the photo angles of the site and ties up fire trucks away from their stations.

Keven Gambold, UE's chief operations officer, said the paperwork involved with obtaining a COA can be daunting, running into hundreds of pages.

Jurkofsky said UE wants to facilitate getting the information to public safety agencies to help them overcome that challenge.

"I think the lack of information to obtain a (COA) is really the stumbling block," he said. "I just think it's where the future is. It's more economical and more efficient."

Kim Wheeler, co-founder of RoadNarrows Robotics, gave an overview of the progress of robotics in the last decade and noted that the recent 'maker' and 'DIY (Do It Yourself)' movements are helping to advance robotics.

"It's helping spur the academics, the hobbyists and students' (interest in robotics)," she said.