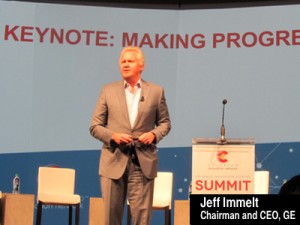 DENVER -- Gov. John Hickenlooper opened the first of a two-day gathering of local, national and international participants in the third annual Colorado Innovation Network (COIN) Summit, telling the 275-plus attending they were part of an ongoing effort to strengthen the state's reputation as one of the most innovative in the nation.

"When we conceived COIN, the goal was to bring together the brightest and gutsiest innovators from around the world and to exchange ideas that will continue to invigorate our private sector," Hickenlooper said.

"We know an idea gets better when we connect it to the support and funding and the right team, and then the growth and potential becomes exponential."

The theme for the 2014 Summit is "Redefining Connections."

Giving the morning keynote address was Jeff Immelt, chairman of GE, who noted that the giant company depends on innovation to thrive.

"We wouldn't be here today if we didn't innovate," he said. "We firmly believe that innovation is what solves problems."

Immelt said GE has a $400 million portfolio for investing in early-stage startups that can be developed into suppliers or acquired at some point. "The best innovators are those that drive productivity," he said.

Immelt said GE has a strong presence in Colorado but hinted that the highly diversified company might soon make a new investment in the state.

Panel discussions on Tuesday focused on the Internet of Things, powering advanced industries and removing barriers to innovation.

She said NSF receives about 50,000 funding proposals each year, with about 11,000 accepted.


"By investing in clever people with clever ideas, we try to keep the United States at the forefront of innovation in the world."

Mitra Best, COIN board member, said a report on Colorado's innovation standing called "The State of Innovation: Colorado 2014," is available on the COIN website and is encouraging for the state.

"The data we see pointed to a very bright future," Best said. "I know the governor wants to see Colorado become the international hub for innovative ideas."

Best said the progress made in the last few years has been impressive but must be continued.

"We're headed in the right direction, but we can always do more," she said.

The COIN Summit concludes today at the Denver Center for the Performing Arts.