BOULDER -- Think of your favorite big-box retail store. It has lots of overhead lights and relatively few sources of natural light from outside.

Now think of that same store, but fitted with devices to bring natural light--sunlight--to the very center of the store. Studies suggest that the addition of daylight to everything from school classrooms to office buildings and commercial buildings can boost student test scores and employee productivity as they help reduce energy use and related expenses.

The idea of bringing natural light into interior building spaces is known as "daylighting," and Boulder-based Sundolier has based its business plan on the idea that happy workers -- combined with energy savings -- serve as powerful motivators to convince schools, institutions, factories and commercial building owners to invest in its technology. 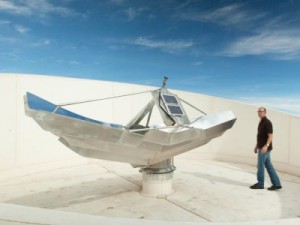 Sundolier's Daylight Harvester sits on a building's roof and uses curved mirrors to focus the sun's rays into a tube that penetrates the building's roof and extends deep inside. That reflected sunlight then is dispersed across the space's ceiling, providing a dose of natural light.

Sundolier says that on sunny days, most installations are able to turn all electric lights off in the day-lit space, even as the sunlight has a minimal impact on solar heat gain.

"Our technology concentrates and streams sunlight," says Peter Novak, CEO of the 10-year-old company, which markets to commercial building owners and institutions such as schools and libraries. "There's a beauty in light that's inspiring."

Research suggests that real health benefits may be derived from daylighting work spaces, says Robert Guglielmetti, an engineer in the Commercial Buildings Research Group at the National Renewable Energy Laboratory in Golden.

He says employees who are connected to the outdoors through daylighting have an easier time maintaining their circadian rhythms, which are those deeply internalized patterns that determine when we sleep and when we wake. He says research shows patients may have shorter hospital stays if their rooms are open to natural light, and students score higher on tests taken in day-lit classrooms.

Then there are the potential energy savings. Guglielmetti says that buildings in total account for about 40 percent of lighting energy use in the U.S., with commercial buildings comprising between 18-24 percent of that total. So getting sufficient amounts of daylight onto work surfaces and tasks can be a real money saver.

An article by the American Institute of Architects lumps daylighting systems into four groups, based on their design and how they channel sunlight into a building: fiber optics, tubular daylighting devices, horizontal systems and vertical systems.

Fiber-optic systems use optical cables to carry light from a roof opening to a light diffuser inside the building using a bundle of cables about two inches in diameter. Each bundle provides daylight that is about as bright as a single light bulb.

Tubular daylighting devices use duct-like tubes to carry light from roof openings deep into buildings using tubes that are 10 to 21 inches in diameter. These devices bounce light from the top of the tube to a diffuser inside the building. They tend to be one of the most mechanically and operationally simple daylighting technologies, the AIA says.

Horizontal systems use rows of wall-mounted panels near the ceiling to harvest light from the side of a building and deliver it to adjacent floors using simple lenses to redirect the light. Light captured by the wall panel is increased by a factor of around 10, and is sent through a network of reflective light pipes into horizontal above-ceiling ducts, and finally delivered to room diffusers.

Sundolier's technology is identified by the AIA as a vertical system, which it says are more compact and sophisticated tubular daylighting devices. Vertical systems capture sunlight using roof-mounted solar-tracking devices that follow the sun's movement throughout the day. They harvest light through a parabolic lens and deliver it into the building through a tube with a highly reflective lining designed to minimize light loss.

When it reaches the interior space, the redirected sunlight is diffused through a "cloud" that measures around 75 square feet in size.

A Sundolier unit is installed at Colorado State University's Powerhouse Energy Institute, which recently opened near downtown Fort Collins. The rooftop collector directs sunlight 30 feet into the building's core, lighting around 1,500 square feet of space, Novak says. The installed cost of the project is $20,000 to $25,000. Novak says that costs can be anywhere from $5 to $25 a square foot and possibly more, depending on the project's complexity.

"The challenge ultimately is to bring daylight to central spaces, and windows and skylights don't do that," Novak says.

Daylighting ultimately is about the "thoughtful introduction of natural light into buildings," says Guglielmetti, emphasizing the word "thoughtful." To be done well and most cost-effectively, daylighting concepts should be part of the building design process from the initial concept and begins with the building's orientation and footprint.

A building that is long and skinny and that has its longest sides facing north and south can make better use of natural light, he says. The amount of glass a building has also can make a big difference. An all-glass building in Phoenix or Duluth might let in a lot of sunlight, but an energy savings is likely to be lost in cooling or heating the building, not to mention shielding workspaces from glare.

Even big box retailers such as WalMart are considering daylighting principles to help cut their energy costs. "If you have thousands of stores, saving 2 percent of your overall lighting bill starts to make sense," he says.

Guglielmetti calls Sundolier's product "pretty exciting technology," but says it faces some drawbacks. First, he says the unit involves some "fairly complex optical engineering" that includes mirrored surfaces and mechanical tracking devices that allow the unit to follow the sun as it moves through the sky.

Those mechanical systems can be subject to wear and tear during normal operation. Novak says the unit uses "proven technology" for tracking the sun, and that the largest challenge comes from installations in the Middle East where salts and silica can stick to mechanical surfaces.

A second challenge is that the unit can present a structural as well as a wind load to the roof, which might need reinforcing as a result. What's more, the price tag might be hard to swallow for some customers. A single unit that lights a single classroom could cost $10,000 to install, which represents a "pretty good chunk of change to light a classroom."

Sundolier began marketing its technology in 2007, just before the commercial construction market collapsed as the recession set in. Construction markets continue to recover and the company still considers itself to be a startup venture, Novak says, even as it celebrates its 10th anniversary this year.

The company is privately held with financial help from Aravaipa Ventures and a "handful of angel investors." Last December, the company received almost $500,000 in early-stage capital and retention grant funding from the Colorado Office of Economic Development and International Trade (OEDIT).

As much as 90 percent of Sundolier's product is made in Colorado, and the company has 5 full-time employees. Novak says the company is outgrowing its Valmont Road space in Boulder, and is looking to relocate in Colorado to continue its growth.

About the Author: David Wagman

David Wagman is a Denver-based analyst and journalist who has covered most aspects of the electric power and oil-and-gas industries, and has written broadly on topics that range from international trade to commercial real estate to homeland protection in a career that spans more than 20 years.