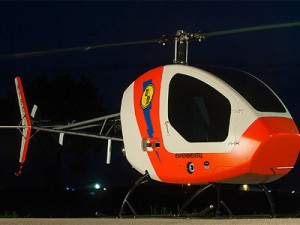 FORT COLLINS - Scion UAS announced it has completed the first test flights of its prototype helicopter, the SA-400 Jackal.

The SA-400 is a turbine-powered, vertical-takeoff-and-landing vehicle that can carry a 100-pound payload for more than four hours and can be launched and recovered from a moving ship at sea.

Scion UAS won a $3 million contract from the U.S. Naval Research Laboratory last year for the aircraft, which can be flown with or without an onboard pilot.

Phillip Jones, Scion's director of software development, said the SA-400 will be ready for delivery to the Naval Research Laboratory this fall, with the first performance tests by the laboratory set for early 2014.

Phillips said the aircraft also has many potential civilian uses, including crop dusting, search-and-rescue, checking power lines and monitoring forest fires - providing a way to do dangerous jobs without putting a human pilot at risk.

"We can take a person out of harm's way," he said.

Founded in 2011, Scion UAS LLC offers a product family of unmanned helicopter systems that range in size from car-transportable to optionally-piloted aircraft.

"We're going to be showing up in Washington, D.C. with this new product and I think we're really going to turn some heads with it because we're a small company that's not well known," Jones said.

"I think we're going to surprise a lot of people."