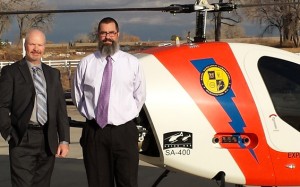 It can lead to the end of a company. But in other cases, it can provide time to pause and reflect on the overall direction of an organization, its team and product focus -- and that can spark a successful new venture.

For Fort Collins-based  Scion Aviation, a challenging economy led to a new direction and the creation of Scion UAS, which now leads the world in the field of unmanned aircraft system (UAS) research and development.

Scion Aviation was founded in 1994 by CEO Jim Sampson, a graduate of Embry-Riddle Aeronautical University. The company's focus was on designing, building and selling its own new helicopter concept -- the Fox -- an all-composite craft for two to four passengers.

"An autonomous helicopter was not on our radar back then," recalls Sampson. "However, what we were working on was an extremely advanced aircraft with many of the features that would later become necessary for unmanned flight."

In 2000, Scion started to construct the shop it now occupies -- adjacent to the Fort Collins-Loveland Airport -- to build, test and certify the Fox.

"Unfortunately, in 2001, just as we were completing the building, September 11th happened," remembers Sampson. "That tragic event basically put a stop to all things aviation for a long time, and the possibility of raising money to develop a new helicopter was out of the question."

Scion went into survival mode, pivoting from aircraft manufacturing to services. That meant building advanced composite parts and sub-assemblies for other companies in the aircraft and aerospace industries, becoming basically a "skunkworks for hire."

The work included projects for a variety of manned and unmanned aircraft projects for aerospace companies large and small. The company's expertise, resources and capabilities grew -- and continue to grow -- as a result of collaborating on those projects.

In 2011, Scion UAS was formed by Jim and Betsy Sampson, Scott Lowry, Steen Mogensen and Dr. Philip Jones. Jones, with a BSEE, a graduate degree from France, and a PhD in electrical and computer engineering, has designed parts for military helicopters and developed deep expertise in the software to control autonomous aircraft.

In addition to his role as CEO of Scion Aviation, Sampson -- an airframe and power plant mechanic and fixed-wing and helicopter pilot for more than 20 years -- acts as test pilot for the Scion UAS. Betsy, CFO, handles the finance and operational aspects of the business. Mogensen, CEO, has 25 years of experience in the telecommunications and UAS world. Scott Lowry, director of operations with Scion Aviation, is director of hardware development for Scion UAS, and designed all of the mechanical and structural components for the SA-200 & SA-400.

The mission of the new company was to develop the technology, software and hardware needed to take existing and new aircraft -- particularly helicopters (also referred to as vertical takeoff and landing, or VTOL, craft) -- and upgrade them into fully autonomous systems.

As unfortunate as the timing of world events was for the company in 2001, the founders' timing for the new company could not have been better. 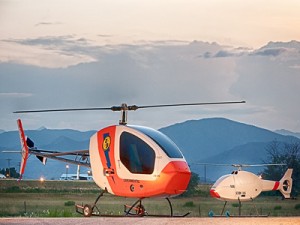 Shortly after Scion UAS was formed, a request for proposal (RFP) came from the Naval Research Lab (NRL) for an autonomous helicopter that aligned with much of the work the company was already doing, and much of the equipment needed to make the parts for the project were also already in place on site.

Scion UAS submitted a proposal and won its first government contract for an unmanned helicopter in September 2012: A commitment by the NRL to purchase two commercial, off-the-shelf (COTS) systems that met mission requirements with respect to endurance and payload weight and size.

Since then, significant advancements in design, hardware, and software have come on a regular basis.

The team was already working on a conceptual design, and, in response to the RFP requirements, Scion modified that concept to develop the SA-400 Jackal, a 1,200-pound optionally piloted helicopter.

"All design and development work was done on our own dime; it was not paid for by the NRL," notes Sampson.

The unit can be piloted by a person or fly autonomously. It can also fly itself with a human on board. It carries a 100-pound payload and can fly for up to four hours. Payload options include a belly payload that can be dropped if necessary, a central payload or side payloads that can carry additional fuel or a spray system for agriculture applications.

The 20-foot-long craft is powered by a turbine engine, which offers a lot of power for its weight, and is flexible in the type of fuel it can use.

The first of two Jackals were delivered earlier this month, following final testing with NRL personnel on hand. It flew forward at 70 mph, sideways at 35 mph, and completed a 20-mile loop defined by programmed waypoints in restricted airspace in Wyoming.

The most challenging test was autonomous takeoff and landing from a moving platform - in this case, a trailer being towed by a pickup truck. This is one of the first autonomous aircraft in the world that can perform this way. NRL applications will likely depend on this capability to launch- and-land from a moving ship at sea.

The second unit is scheduled for delivery to the NRL in Washington, DC before the end of the year, and Scion has two more units in production.

In addition to the SA-400, Scion UAS has also developed a smaller unit, the SA-200 Weasel, a 150-pound, six-foot-long unmanned unit. With a 25-lb payload capacity, it is adaptable to a wide variety of uses, including search-and-rescue, fire suppression, border patrol, airport security, power line inspection, anti-poaching and anti-piracy.

It will operate as a fully-autonomous unit or via remote control. Automated operation will also feature the ability to launch and land from a moving platform, such as a land vehicle or seagoing vessel, and fly a pre-programmed route. The tail can be removed for shipping and storage.

While the units are attracting attention for a variety of reasons, their competitive cost, flexibility given a modular design, and the team's approach to development has served to differentiate them from other options on the market.

Mogensen emphasizes that the company's background in manned flight is a significant advantage.

"There are many products out there that come from the hobby and model world," he said. "Our approach and processes are designed around manned aircraft certification. It brings added credibility and safety, and our intent has always been to create a product that can be certified. 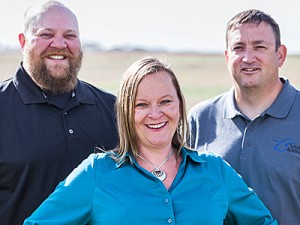 "The SA-400 is currently classified by the FAA as an experimental aircraft, and it is one of the few worldwide poised to take on certification for the uses we have planned. (Current airworthiness certification covers manned flight only, so this will happen when the FAA decides on certification rulings for UAS craft.)

"There's a huge difference between the carefully planned safety testing we do, and the 'fly-it-until-it-breaks' approach that too many take," adds Mogensen. "For the SA-200, we used ground-based testing to make sure that our 150-pound craft produces 250 pounds of lift.

"We tested the SA-400 with a pilot in control, then with a pilot on board during autonomous flight, and then moved to unmanned autonomous operation. Taking an approach based on science and engineering to ensure the safety of our products in flight and have an accurate understanding of their flight performance is critical."

A competitive product on the market runs around $15 million. The price is expected to come down over time as the market expands and production volume grows.

Some of the biggest opportunities available -- beyond military applications -- are sales outside of the U.S., in large part because regulations here have been slow to move forward.

In June of 2013, Raphael Pirker was fined $10,000 by the FAA for allegedly recklessly flying a remote control aircraft in 2011. The penalty was dismissed because the FAA has issued guidance but no regulations that apply to model aircraft or that classify such craft as an unmanned aircraft system. That uncertainty has caused concern and problems for companies like Scion UAS.

"The ruling in the Pirker case has been appealed by the FAA," says Mogenson. "This may put some pressure on the FAA to have more focus on establishing rules for the use of UAS in the national airspace, but as long as the appeal case is ongoing, nothing has really changed.

"Within the industry, it is our hope that the FAA will issue a set of rules for the legal use of unmanned aerial systems in the very near future. As it is, the rest of the world is moving forward and the U.S. is falling behind."

Mogensen notes that it is currently difficult to sell a UAS in the U.S. outside of the defense industry or academia -- given the FAA, along with personal privacy and liability issues. But other markets loom large.

"In Japan, 2,500 of this type of craft have been flying for years, in agriculture alone. In Brazil, the UAS market is worth $5 billion."

Meanwhile, as Scion UAS achieves a variety of important milestones, Sampson emphasizes that "Scion Aviation is still alive and well."

The company continues to manufacture parts for other companies manufacturing fixed-wing and helicopter aircraft. Scion Aviation also manufactures the composite structures for the SA-200 Weasel and the SA-400 Jackal for Scion UAS. Then, Scion UAS completes the final assembly and testing required to complete these to their final UAS/OPV status.

Together, Scion Aviation and Scion UAS have a total of 14 employees, including four engineers, management, sales and manufacturing, with anticipated growth in the near future.

"We have plans for many more exciting aircraft development projects in our future," Sampson says.