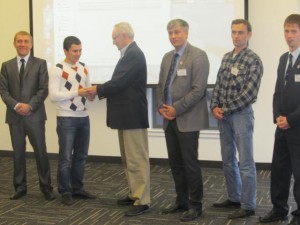 FORT COLLINS - Visitors from Russia this week are getting a first-hand look at how Northern Colorado promotes energy sustainability, a visit that also included a tutorial on local government transparency as practiced in Fort Collins and Loveland.

The five visitors, representing a cross-section of energy and technology leaders in Russia, are touring the region and learning about how government and entrepreneurialism works in the U.S. as compared to their home country.

The visitors were welcomed to the city of Fort Collins by Mayor Pro Tem Kelly Ohlson on Tuesday at the Rocky Mountain Innosphere, a Fort Collins startup incubator.

"It's great to have you here, and hopefully we can learn a lot from each other," Ohlson said.

Ohlson praised the group's overall mission - to learn about environmental sustainability -- which he said there was "no more important path to have (been) chosen."

Ohlson cautioned the group that the city's considerable progress in environmental sustainability had been no easy matter.

"I think we have success stories -- this building is a success story," he said of the city's partnership with RMI. "And we're working with Colorado State University on partnerships that are working.

"But it's been my experience that almost every attempt to regulate (environmental sustainability) has been met with fierce and strong resistance and opposition.

"We are trying to do things the right way in Fort Collins, but it's never easy," Ohlson said.

The visitors also heard from Bruce Hendee, the city's chief sustainability officer, and Josh Birks, the city's economic health director, who talked about Fort Collins' efforts to create a healthier lifestyle for its residents.

Hendee said the city's "Climate Action Plan" has reduced carbon dioxide emissions by almost 15 percent since its implementation in 2005.

Birks told the group that Fort Collins is pursuing a variety of green and environmental sustainability programs while encouraging the creation of an "innovation ecosystem."

"We are trying to take our community and make it a laboratory to try out new ideas," he said. "We in Fort Collins want to be a place to develop new ideas and share them with the world."

One Russian visitor asked how to get community support for an innovative idea, noting that in Russia the government comes up with the idea and the citizens decide if they like it or not.

Hendee suggested a different approach might work better, as it has in Fort Collins.

"If you ask the citizens to give their ideas, then they become their ideas and they will support them," he said.

That suggestion may find its way back to Russia.

"On this trip I would like to learn about environmental protection and how the government works with the public," said Sergey Frishman, a representative from the Siberian Environmental Agency.

"If I find some useful mechanisms, I would like to use them back home."

Tuesday's visit to the Rocky Mountain Innosphere also included a tour of the facility and introductions to some of the Innosphere's client tenants, along with an address by Mike Freeman, RMI's CEO.

Dr. John Fitch, a Loveland resident who helped organize the visit, said visiting RMI was a must for the group.

"Our purpose is to learn how governments, nonprofits and the business community work together, and the Innosphere is the nexus where that takes place," he said.

The Russian visit, which began Oct. 26 and concludes Nov. 3, was organized by the Open World Leadership Center, an international exchange agency that has facilitated the visits of more than 17,000 current and future leaders of Russia and former Soviet Union countries to meet members of Congress and Americans with similar professions.

Local hosting of the Russian visitors was provided by the Northern Colorado Friendship Force and the Library of Congress Open World Young Leaders Program co-chaired by Fitch and Loveland resident Dorothy Cada.