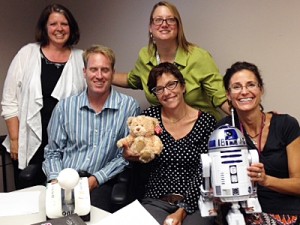 BOULDER -- Robots built by autistic kids, for autistic kids and used by everyone in a public library setting.

That's the dream of Jalali Hartman, "Chief Human" and founder of ROBAUTO, a robotics prototyping company in Boulder, and it's about to come true.

Often referred to as a "serial entrepreneur," Hartman held his first yard sale at age 4 and had a painting franchise in college. Over the past 18 years, he launched four successful technology startups, creating more than 500 jobs and generating more than $1 billion in revenue.

When Hartman became interested in robots a few years ago, he decided to create ROBAUTO, a startup focused on affordable robotics systems. But he never imagined his endeavor would involve kids with special needs.

Startups need capital, and crowdfunding is often the way to get it. During a live crowdfunding festival in Florida, Hartman showed off various types of robots to get feedback from kids. When parents of autistic children brought their kids to the exhibit, Hartman noticed something--kids who would not respond to their parents were responding to the robots.

"Somehow, the robots were acting as communication bridges," says Hartman. "Children were speaking 'through' the robots to their parents." 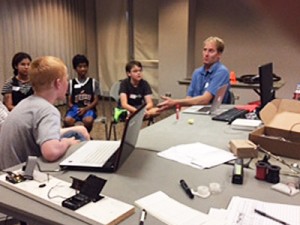 Hartman researched this phenomenon and learned that people on the autism spectrum often have difficulty making eye contact, reading shifting facial expressions, and dealing with changing situations. Robots provide a predictable and safe way for these individuals to interact while building trust, reducing anxiety and eliminating the fear of rejection.

The crowdfunding event and Hartman's research helped define his company's purpose: to make affordable robots for autistic children and adults.

"We wanted to create a 'design-agnostic' robot, something whose appearance could be easily customized for specific needs," says Hartman. "To do so, we needed a flexible platform to design control modules that could be plugged into any type of body. We chose to create a flexible, yet easy-to-learn Linux-based operating system (one-os) that runs on any Raspberry Pi.

"We knew the right appearance and personality for the robot could foster trust and positive feelings, but we didn't really know the best design for the body," says Hartman.

That's why Hartman decided to let his "customers" become his engineers. Why not have the community who would use the robots--children on the autism spectrum--design them?

All Hartman needed was children to form his design teams. He decided to target libraries because the pool of children would be wide and diverse. He planned to create library-based Innovation Teams where he would teach kids about robotics, engineering and entrepreneurship. Kids could attend for free, have fun, and begin designing ROBAUTO's first robot.

That's when Hartman met Katherine Weadley, professional librarian at Longmont Library and mother of two autistic sons. Hartman approached Weadley with his idea of forming an Innovation Team consisting of children on the autism spectrum.

Weadley was intrigued, and suggested the team could work during the library's special access browsing hours.

"Special Access Browsing" was held solely for autistic children on Friday evenings. During that time, parents and their children visited the library while it was closed to the public, participated in events, browsed for books, and read in a safe, quiet, welcoming environment.

When Hartman told Weadley the Innovation Team would be tasked with building ROBAUTO's first robot, she was skeptical. But her skepticism soon turned to wonder.

"Working with Jalali has been an absolute delight," says Weadley. "For an entrepreneur of his caliber, Jalali is incredibly friendly, kind, and willing share all he knows with others. He's not just in it to make money ... he wants to use his skills to make a difference."

With the Innovation Team, autistic kids work side by side with neurologically typical kids. Together, they are starting a company and developing a product. Skill sets are matched with interests: some kids work on logos and marketing presentations; others sketch the look of the robot; and the rest program the robot's various control modules.

"The Innovation Team has provided a way for kids on the autism spectrum to connect with the world and let down their guard," says Hartman.

Weadley concurs. "Jalali asks for their opinions and gives them honest feedback. He shows them they can contribute, have a role, and be successful in their own way. Their confidence has grown by leaps and bounds."

ROBAUTO has benefited as well. The results of the Innovation Team's efforts have produced a prototype robot (still unnamed) for the Longmont Library. The library will use the robot to greet patrons, check out books, and stream multi-media through the library network.

For Hartman, this means even bigger plans for the future. He wants ROBAUTO to form Innovation Teams in at least three more libraries in Colorado. He hopes to offer the program to 100 children who will design and build three fully functional robots for area libraries and schools in 2015.

About the Author: Martha Roden

Martha Roden is a freelance writer and usability specialist with more than 30 years of experience working with high-tech, low-tech and no-tech companies. She and her husband moved to Colorado from Silicon Valley in 1990, trading the ocean for the mountains, and she's never looked back.
True to her tagline, she works hard to "make the complex simple," whether she's collaborating with developers to make an easy-to-use mobile app, helping a marketing team create engaging Web content or writing understandable articles, user guides and textbooks. Her specialties include technical, marketing and educational writing, along with user interface mockups and usability testing. So far, the only writing she hasn't done is fiction.
Martha's love of making complicated things easy to understand started early. Even in kindergarten, she loved explaining things to her fellow students. When she's not writing, editing or evaluating, she likes to do yoga, watch movies with her husband, David, enjoy nature and play with her super fuzzy kitties.