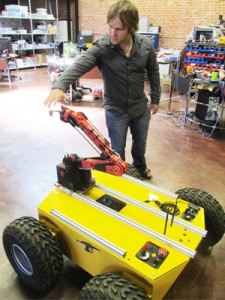 LOVELAND - The robotics line at RoadNarrows Robotics in downtown Loveland just got a little deeper and wider.

The 11-year-old company recently released its Hekateros family of robotic manipulators with the ROS (Robot Operating System) to make them easier than ever to use in research and light manufacturing applications.

RoadNarrows makes the Hekateros manipulator on-site with its 3D printer, which eliminates the need to contract out the production process.

"We can produce it basically in-house without going to a tool-and-die manufacturer," said Philip Kulikauskas, RoadNarrows' Asia-Pacific business manager.

While some parts of the robotic arm can't be made in-house, they are produced by local area companies, he said.

Kulikauskas said RoadNarrows has been using a 3D printer for about three years and makes it available to local companies, artists and residents.

Collin Horvat, RoadNarrows' mechanical engineer, said the Hekateros arm is strong and sturdy and can lift a kilogram (2.2 lbs.) at full arm extension.

Combined with a rugged, all-terrain steel mobile platform called Kuon that can be remotely controlled, the arm and platform can be used for a variety of military or hazardous materials applications, Horvat said.

The mobile platform can support and haul up to 500 pounds at a time.

Horvat said the Kuon mobile platform is a new market for RoadNarrows, whose "bread and butter" is contract engineering work.

Horvat said RoadNarrows, founded by Kim Wheeler and Robin Knight in 2002, does a lot of collaborative work with universities, including CU-Boulder.

"We have a close relationship with them," he said. "Everything we do is related to robotics or overlaps it somehow."

Horvat said the Hekateros robotic arm and Kuon mobile platform are "a natural extension of what we've been doing and filling a market gap we saw."

"Typically, when people think about robotics, it's about an arm and what it can do," he said. "But we're big on integrating sensors and systems."

RoadNarrows is playing a big role in the upcoming NoCo Mini Maker Faire set for Oct. 5 at the Rocky Mountain Center for Innovation and Technology at the former Agilent campus in south Loveland.

The company will set up and oversee the fair's Science/Research Pavilion and plans to make the public debut of the Hekateros arm and Kuon mobile platform at the event.

Kulikauskas said the product was first demonstrated at the 2013 Consumer Electronics Show in January and "got a lot of interest."

[...] doing some very innovative work in the world of robotics.  Great write-up in Innovation News (http://innovationews.com/innovation-news-releases/road-narrrows-rolls-out-hekateros-robotic-arm-and-...) on some new robotic products they will be introducing at the upcoming NoCo MiniMaker Faire in [...]