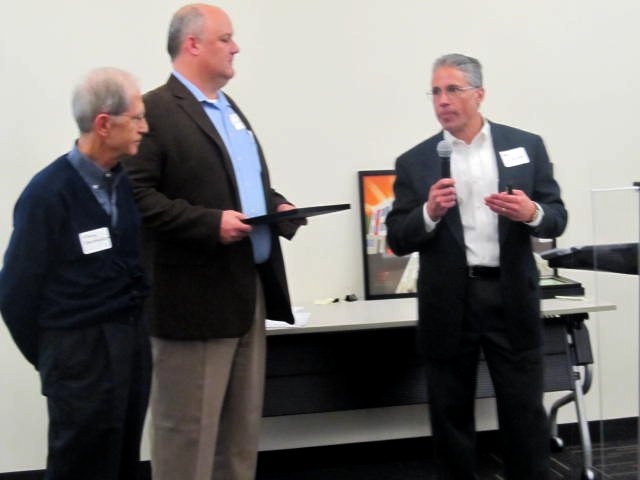 About 50 retired and active local business professionals are involved with SAGE - the Social and Advisory Group for Entrepreneurs - offering their business experience and insight to RMI client companies.

RMI honored several members of the SAGE team, including Lifetime Achievement Awards to Robin Steele and Doug Johnson, who helped found and lead the program, and Chris Christopher received the 2012 SAGE Advisor of the Year Award. [See videos below.]

Ben Walker, who leads the SAGE group, was also honored at the event.

"SAGE wouldn't be what it is today without Ben," said Doug Johnson.

"What do you say about people who come into your world and do amazing things," said Mike Freeman, RMI CEO. "There's no way we could be successful at the Innosphere without SAGE.

"The main reason is the value that's added. It's such an important benefit for us. Every company that comes in, we start by telling them about SAGE."

"This is the largest in-kind donation we've had in our 14-year history," Freeman said.

"We're very proud to partner with the Innosphere," said Mike Burns, company president. "What you do here is making tomorrow happen, and we're proud to be part of it."

"One of the challenges of supporting our bioscience companies is a lack of expertise," he said. "It's been hard to support our biotech companies in a significant way."

Mike Handley, who formerly served RMI in that role, left in November to become CEO of Fort Collins-based CHD Bioscience.

Freeman said CID4 - established in 2009 -- has "a great track record of working with biotech companies and helping them get funded."

"We've got good traction with Denver-Boulder companies but not so much here," she said of Northern Colorado. "So we're really excited to be working with RMI and the folks up here."

Freeman also praised the growing closer relationship between RMI and Colorado State University, especially with CSU Ventures - the research commercialization arm of CSU - and the Research Innovation Center on the CSU Foothills campus, where nine companies are receiving startup assistance.

Increasingly, some RIC companies are coming to RMI for further assistance when they leave that program, Freeman noted.