FORT COLLINS - It's one thing to be able to record continuous video from a helicopter over miles of oil-and-gas pipelines or an electrical transmission line to satisfy regulatory compliance requirements.

It's another to be able to permanently embed that video with GPS location and time data for immediate geographic analysis and long-term enterprise asset management.

At Remote GeoSystems, it's all about doing both.

"It breaks the mold on everything that's been done in the past, including methods currently utilized by many military platforms," he said of Remote Geo's innovative video geo-tagging algorithm and post-mission playback methods.

With Remote Geo's digital video recorders - some of which can simultaneously record up to four channels of video and GPS data - and its suite of project mapping software, clients can "snap" out a still image from the video and zoom in for a much closer look. If an issue is identified, then users can add notes and add work order documents for further investigation/mitigation.

For example, a video of a gas pipeline may reveal an area of dead grass adjacent to the right-of-way, which could indicate an underground leak and prompt an on-site inspection using the GPS location embedded in the video frame.

"It all depends on how the business or individual wants to make use of it," he said.

Dahlke says Remote Geo takes an "open format" approach to its video mapping technology, making sure it's compatible with existing corporate GIS systems and even other data collection hardware such as gas leak detection systems.

"We like to keep things simple," he said. "We want technology to be compatible with other third-party hardware and software, but of course we are especially happy when customers utilize our integrated system."

"We work from the camera back," Dahlke notes. "We don't make or sell the video cameras themselves, we specialize in DVR hardware to geospatially capture the video and the software to then analyze, package and manage the project data." 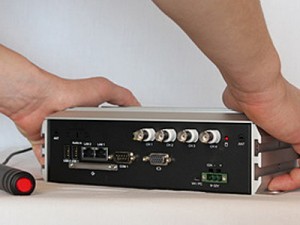 Remote Geo's geoDVR™ - a geospatial digital video recorder -- is its flagship product that produces files that are easy to view and analyze with the company's LineVision™ suite of desktop software and extensions, including applications that leverage mapping technology from Google Earth, Esri ArcGIS, PLS-CADD, Bing and Open Street Maps.

The company has a couple of of geospatial digital video recording systems and several versions of LineVision mapping software available on its website.

Most sales opportunities currently require a certain amount of consultation. "We look at a client's unique scenario and budget, and from there offer the various pieces that  would work best for their needs," said Dahlke.

"Jeff and his team have the innovative products and prompt support that organizations like ours require to ensure we conduct our operations in a smooth and profitable manner," said Stephen Mugford with Integrated Sensing and Surveillance Inc., a Canadian company specializing in aerial pipeline patrols and leak detection services.

Dahlke said Remote Geo is also talking to potential customers in the defense and security sectors.

"Defense and security is a very intriguing area for us," he said.

Dahlke said the company's software is developed in Fort Collins and the geoDVR hardware is also assembled and tested there - part of a corridor sometimes referred to as GIS Alley.

Three years into its creation, Dahlke describes Remote GeoSystems as "an emerging tech company and not a startup. We've been selling proven off-the-shelf products for over three years, and we are now at a point to take it to the next level."

And he proudly notes that the company has not incurred any debt or outside capital to get where it is today.

"This comes from blood, sweat and tears and taking care of our clients," he said. "All of our revenues have been through sales."

And a lot of hard work by everyone connected to the company - employees, partners and clients.

"A little over a year ago we thought about the future and really ramped up our development efforts," Dahlke said. "2014 has been a really incredible year of new product releases for us.

"One goal is to become the 'Microsoft Office' of location-based video inspection and patrol software, meaning a ubiquitous and utilitarian platform that supports an indefinite number of different business workflows and communication needs."