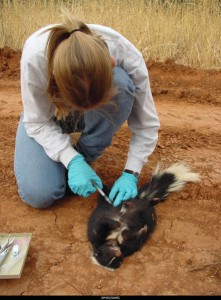 FORT COLLINS -- For wildlife biologist Charles Rupprecht, skunks just made his list of the most dangerous animals in Colorado.

As one of the world's leading authorities on rabies, Rupprecht has spent the past two decades finding new and better ways to treat the disease, which is among the oldest and deadliest in the wild.

And this summer, skunks have fallen prey to it like never before.

Rabies is a vicious, slow-burning virus, the sort that can be controlled but rarely cured. When 33 rabid skunks were reported across Colorado in April and May - a noticeable increase from just five cases in the previous three months - the news caused a minor stir.

By no means was it an outbreak, but for Rupprecht at the Centers for Disease Control and his colleagues at the Fort Collins-based National Wildlife Research Center, it was a trend they couldn't overlook. Several federal and private outfits have been working on improved vaccines, but any major breakthrough - say, the new vaccine strains being developed by the Fort Collins lab Ventria Biosciences - is always followed by at least two years of testing before it's ready for the wild.

"The goal is always to keep it from spreading, then fill in the blanks until we're able to prevent and control it," said Rupprecht, who's based at the CDC's Atlanta headquarters and is in charge of its national rabies program. "Eventually, the goal is total elimination."

Along with a current total of 62 infected skunks, unusual cases like two diseased bison in Larimer County and a bat that bit a Denver Zoo employee have pushed the state's rabies rate near the highest levels in history, according to the Colorado Department of Public Health and Environment.

Northern Colorado is ground-zero for rabies this summer, with Larimer and Weld counties claiming nearly half of the wildlife cases statewide. In Larimer, where more than a third of all rabid skunks were found, an added wrinkle is treatment: The only wildlife rabies vaccine approved in the United States is bait for raccoons - the skunk-specific variety is still in its infancy.

What's more, most of the infected skunks were within Fort Collins city limits, an urban area where vaccines using live viruses can be dangerous to humans and pets.

"We're trying to develop something that will be effective for free-ranging animals and target as many as possible, while also reducing any adverse effects on non-target species, particularly humans," Rupprecht said. "There is no such thing as a 100-percent-safe vaccine for all target species, especially when you're dealing with them in the wild."

The unpredictable, ever-evolving process of treating rabies in the wild is similar to the virus itself. Rupprecht describes the symptoms of the neurological disease in detail: flu-like fever, ghost sensations around the bite area, hallucinations and seizures, and problems swallowing that can lead to the recognizable foaming at the mouth.

But those telltale signs don't appear until the final two weeks, right before an infected animal slips into a coma and dies. The disease can sit around for months or years depending on the kind of animal or size of the bite.

From a public health perspective, rabies is most dangerous when passed from wildlife to humans or pets. Treatment, then, must start in the wild. Thanks to required vaccinations, rabies is practically non-existent in domesticated animals.

In 1990, Rupprecht made the biggest rabies breakthrough with the introduction of "baiting," a process of distributing vaccines through animal-specific bait. The virus strains are built to treat one species and one species only.

Over the last 22 years, Rupprecht and others have turned their sights on a number of free-ranging mammals, from raccoons on the East Coast to bats, skunks and coyotes in the Rocky Mountain region. Kurt VerCauteren, rabies project leader for NWRC, claims these populations - or reservoirs, as biologists say - can be difficult to vaccinate, largely due to variety: what works for one animal may not work for another.

"There needs to be more and better vaccines for a variety of critters," VerCauteren said. "We want to see how a different vaccine deals with different reservoirs of animals."

In the labs of Ventria, located just north of Old Town Fort Collins, crafting a new rabies vaccine is a high-profile project. The private firm specializes in custom medicines, tinkering with the molecules of viruses to make more refined treatments.

Through a year-old collaboration with the CDC, Ventria technicians have been working on a rabies-bait vaccine for urban areas like Fort Collins. It's a response to two cases of human infection that occurred when people came in contact with bait made by Georgia-based animal health company Merial.

"The Merial vaccine is based on a live virus that was genetically engineered to produce the antigen," said Scott Deeter, president and CEO of Ventria. "The goal of our project is to eliminate the need for live virus altogether. This will eliminate the risk of humans being infected with the virus."

Deeter is quick to note the current vaccine has been extraordinarily effective. Along with East Coast baiting, it is largely responsible for stopping rabid coyotes from infecting dogs in Texas. The new bait would be an improvement on the current one, using a Lyme disease vaccine as a carrier for the rabies antigen.

For now, Deeter and his team are making the growth process for the antigen cost-effective - arguably the biggest hurdle for new vaccines. The research phase is covered by a National Institutes of Health grant, but long-term production is another story. It will also take the requisite two years for field testing, followed by approval from the federal Council for Veterinary Biologics, what VerCauteren describes as the "EPA for wildlife vaccines."

"If we can do better, faster and cheaper, we obviously want to do that," VerCauteren said. "If there were more options available, we could do one here, but we can't spread ourselves too thin with these limited budgets."

Due to budget constraints and lack of skunk-specific vaccines, baiting has never been tried in Larimer County. But as the CDC and Ventria work on a vaccine without the live rabies virus, VanCauteren and the NWRC have tapped an Ontario company, Artemis Technologies, to tweak a vaccine already in use in Canada. On Aug. 20, researchers started field tests, dropping bait in five states in the Northeast. The long-term goal -- as always -- is to eventually rid the U.S. of rabies in all forms.

If only the skunks knew how many scientists were working for them.

"Rabies kills people, plain and simple," VanCauteren said. "In the U.S., we've done a great job slowing down and preventing rabies. But the elephant in the room is the wildlife reservoir. Because we have these wild threats bubbling, we always have the threat of disease."

* To see a spreadsheet showing statewide cases in 2012, visit http://www.cdphe.state.co.us/dc/zoonosis/rabies/lab_positive_animals_2012.pdf